Ok.  You are going to laugh.  I went to Albertson’s on my bike and I have one of those locks that is like telephone cord that is curly and it has a 4 number combination that you can set the numbers for and when I got to the store I went to lock it and as I was pushing the lock together I felt and heard a clicking sound and as I was pushing it in I knew I messed up big time.  I immediately tried pulling it out and it wouldn’t budge.  I started freaking out.  I started trying different combinations because I thought that I turned the dial to set it then accidentally turned a number as I was pushing it in, which I have done before.  I had no luck.

I went into the store and told the lady at the information counter (she sells lottery tickets, cigarettes, electronics and does the photo stuff) and told her what happened and she called Jim to call her and told him what happened.  This other lady came up and I told her what happened and she said that she knows I come in here a lot but how do they know it’s my bike.  Luckily, I have the paper work with the serial number and the manual with the model of the bike on it as well as the receipt and I even took a picture of it.  WHEW!

So Jim finally came to the front with bolt cutters and I showed him my paper work which he didn’t actually look at because I think he figured if I took the time to get someone to bring it to me and I was showing it to him then he believed that it was indeed my bike.  So, he tried cutting it and it was really hard for him to cut it but eventually he did get it off.  It made me feel good that he couldn’t get it off because I knew I had a good lock.  But on the other hand…  I wanted my bike back lol.

He told me that if I didn’t have this proof of ownership then it would’ve sat there until someone tried to claim it and then eventually they would’ve had to call a company out to get it and auction it or something.  So I’m very glad I bought my bike at a store and not at a thrift store with no manual and no receipt.  And I’m especially glad that I took a picture of it too. 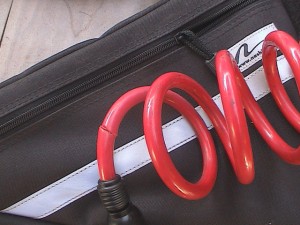 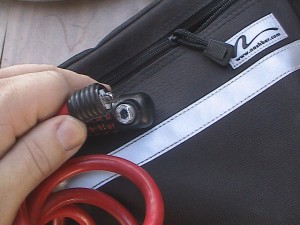