I hate wasps, no I mean I really hate them.  Every time I turn around they are trying to build their nest on our front door.  This image is not the same one, I didn’t think to take a picture because whenever I see a nest I freak out, grab the WD-40 and spray it into the hole then within half an hour I’m knocking it down with whatever I can grab.  It’s like how you freak out when you see a roach then grab a shoe or say, a hammer lol.

It was only a month ago that I had to do this.  A wasp started building a nest on our front door and I spray it with WD-40 then waited about 30 minutes and knocked it down.  I didn’t know it came back and started over, if that is the same wasp, do they even live that long?

The last nest I knocked down shredded because of the WD-40.  It was empty so I didn’t have to worry about anything coming at me.  This time it was full, it wasn’t full of wasps though.  It had maybe 1 wasp inside of it, about 20 spiders and something that looked like larvae, I’m not quite sure.  It looked exactly like this: 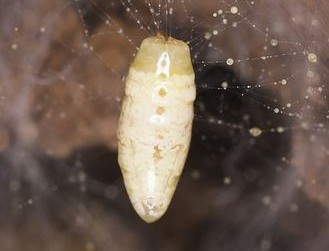 They were all dead, probably because of the WD-40.  But I’m wondering why it had all those spiders and larvae inside of its nest.  I don’t know much about the insect world, other than how to kill them but I’ve never heard of this behavior before.  Having spiders in a wasp nest that is.

One of our neighbors a block away tells me every year that there are wasp nests all over her porch and she has to dodge them to water her lawn or do any gardening.  That’s why her garden is such a mess because she can’t go out there to do anything because they keep stinging her.  I told her that she should call someone out to get rid of them or go to the store and buy some wasp spray.  She can’t afford an exterminator and she’s too afraid to try to spray them or knock their nest down because she’s afraid she’ll get stung so she lives in fear of her own garden and porch.

We don’t have a large porch that you can sit down on, or a garden, all we have is our front door.  I have to be able to walk in and out of the house without being stung so I had to act quick before it got any bigger.

I read on eHow Home that if you spray the area that the nest was the wasp will not return to that spot so I sprayed the heck out of that spot and around it and even on the other side just in case.  You can’t be too careful right?

If I never see another wasp I will be a very happy person but I have a feeling that the war has begun lol.  I’m pretty sure this isn’t over and it will be back for revenge.  That is if it didn’t die from the WD-40 that I sprayed on it while it flew away from me.