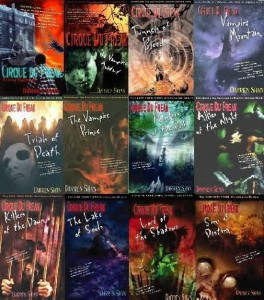 I started reading the Darren Shan “Cirque Du Freak” books late last year on Halloween.  I figured it was time to start a new series of books and since it was Halloween, I wanted it to be some type of horror book and I remembered the Vampire’s Assistant started out as a book so I figured it would be a good read.

The ebooks were only a couple bucks and I figured it would be a very good purchase.  I didn’t read them all right away, I read the first 3 then stopped to pursue other books.  But last month I decided that I wanted to finish them once and for all.

These books are small so it doesn’t take more than a day to read them, less for everyone else who doesn’t have dyslexia.  So it usually takes me 2 days at a couple of hours each day to read them.

The first book was very similar to the movie but with a lot more detail.  At first I thought the movie was all 12 books rolled into a movie but after the first book I realized it wasn’t the case because decades have passed in the book where only maybe months have passed in the movie.  But the movie also didn’t get to the war of the scars either and with Darren and Mr. Crepsley leaving the Cirque at the end of the movie, or rather the next day when Darren has had his rest, it leaves it open for more story which I doubt they will ever tell in movie format.

The books were very good to read and since I had most of the characters in my head from watching the movie I was able to visualize most of them for when I read the books.

I hate giving away plots or story lines because I don’t want to spoil anything for anyone but if you do get a chance to read these please do.

I said the books were a couple bucks, well, unfortunately they raised the price.  eBooks are now $7.99 each but you can buy the actual books in a set for only $35 on Amazon.  That’s only a couple bucks per book and it is so worth it.  I don’t know if $8 is worth it since they are so small though.  I’m just glad I bought the whole series when I did lol.

If you weren’t aware of the story, here is a synopsis from the Cirque du Freak Wiki:

The Vampire’s Assistant is a fantasy-adventure based on the first three books of the series, The Saga of Darren Shan, by author Darren Shan about a teenager who unknowingly breaks a 200-year-old truce between two warring factions of vampires. Pulled into a fantastic life of misunderstood sideshow freaks and grotesque creatures of the night, one teen will vanish from the safety of a boring existence and fulfill his destiny in a place drawn from nightmares.

16-year-old Darren was like most kids in his suburban neighborhood. He hung out with his best friend Steve, got decent grades, and usually stayed out of trouble. But when he and Steve stumble upon a traveling freak show, things begin to change inside Darren. That’s the exact moment when a vampire named Larten Crepsley turns him into something bloodthirsty.

Newly undead, he joins the Cirque du Freak, a touring sideshow filled with monstrous creatures from a snakeboy and a Wolf Man to a bearded lady and a gigantic ringmaster. As Darren flexes his newfound powers in this dark world, he becomes a treasured pawn between the vampires and their deadlier counterparts. And while trying to survive, one boy will struggle to keep their brewing war from devouring what’s left of his humanity.

There is a lot more about the story than in this synopsis but you can find out about it by reading the books.  This synopsis says the movie is based on the first 3 books but that isn’t exactly the truth because so much happens in the 2nd and 3rd book that you never even see in the movie.  If I were you I would just get the books and find out for yourself.  I double dare you.