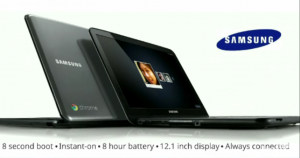 I saw the news this morning on Twitter from Editor for PC Magazine Lance Ulanoff:

Chrome OS Site also reports the specs for the Samsung netbook along with other pictures of the netbook from different angles.  The Samsung Chrome OS netbook will sell in WiFi only for $429 and 3G for $499.

I have been using my CR-48 Google Chrome OS netbook since mid December when they first started shipping and I love it.  I still use my desktop computer but only for things that I can’t use my CR-48 for like photo editing with Gimp, balancing my checkbook via Microsoft Money and playing Lord of the Rings Online.  My CR-48 has basically become my default computer for everything else, as it was supposed to be for the pilot program.

I cannot say that I agree with those prices because you can get a netbook for the same price with Windows installed and be able to install software that you want on it to do everything my desktop computer can do.  The Google Chrome OS is internet only.  You can get the internet on a Windows netbook so why pay that much money?

It’s a great operating system, I just don’t think it’s that great that you would pay $500 for it.  I think that they will go down in price eventually so I would wait until they are a more reasonable price.