I have been watching True Blood since the very first season in 2008.  Let’s just say that any tv show with anything that is supernatural is my cup of tea.  Well, this isn’t just any supernatural show to me, it’s an obsession.

I didn’t actually start reading the books until last year at the end of the 3rd season because I couldn’t afford to spend $60 on the book set at the book store.  It just so happened that a couple of months later I bought a Nook so I was able to buy the ebooks 1 at a time.  They were oddly still $60 for ebooks 1-8 (although I’m sure they’ve gone up by now) but I could still only afford one at a time.

I read the first one and was shocked at how different it was from the first season but kinda glad in a way because it was giving me an alternative to the story.  There were some characters and storyline that the show didn’t have and vice versa.  It was like I was watching one show while reading about an alternate dimension of the same show.

Then I read the 2nd, then the 3rd and the 4th and so on.  Well, this is the 4th season and now that I’ve already read the 4th book and I’ve seen the first few episodes, the feeling that I’m having about that alternate world has totally changed for some reason.  Now I’m thinking, hey, that person isn’t supposed to be dead, they were in the 6th book.  It’s just like how Lafayette died at the end of the first book but they kept him in the show, well, there are people being killed off who were supposed to still live in future seasons.  I wonder how they will get around all of that.

I’ve been asked if I like this new season because of how Jason is being bitten by Crystal and her fiance/brother/cousin Felton.  Well, that happened in the book.  The same with Eric losing his memory, or having them taken away from him by witches.  Those are the 2 parts of the story that were supposed to happen.

The thing with Tara sort of shocked me but it wasn’t a bad thing.  I just wasn’t expecting that to happen.

Andy being addicted to “V” really threw me for a loop.  I remember at the end of the 3rd season when he looked at the blood in the bottles and then put them away again in a hurry but I never expected him to become such an addict.

Jason becoming a cop was totally unexpected for some reason but he looks good in a cop uniform.

Bill becoming King of Louisiana and how he became the King really shocked me.  In the books he’s not the King because Sophie Anne is still the Queen but he is an authority figure, don’t ask me to remember what he does lol.

Then finally, the whole 12 1/2 month passing was kinda strange and Eric buying Sookies house.  That was totally unexpected.

Well, no matter how many changes they make, I will still be obsessed with the show and I will continue to read the books and watch future seasons.  When I am loyal to a show, I will continue to watch no matter what curve balls they throw at me.  In fact, it’s the curve balls that keep me watching so keep it up Alan Ball (get it?  curve balls… Alan Ball… no?).  Thanks for making such an awesome book into an awesome show.

Oh and did anyone notice how whenever they show someone reading a book it’s always by Charlaine Harris?  I don’t know why but I always get the chills and I wonder what book that was so I can read it.  I know she’s not reading the Sookie Stackhouse books.  Wait… she’s not right?  Just checkin’. 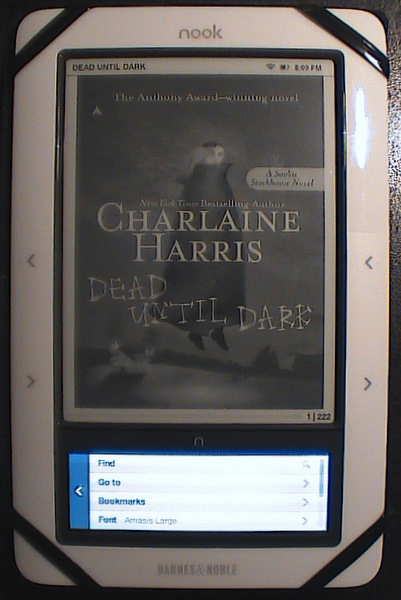 Well I finally did it. I finished reading my very first Nook book which was Dead Until Dark by Charlaine Harris. It’s the first Sookie Stackhouse novel that True Blood is based upon.

The first e-book I ever read was on my computer last month but this is the first e-book that I’ve read on my new Nook. It was certainly an interesting experience.

I did get many chances to look up the definitions of many words which thrilled me to no end because I just can’t stand reading a book and not knowing what the meaning of a certain word is. I start feeling stupid because I don’t understand. I dismiss it without even trying to find out then I’m lost.

What’s even funnier is that while I was reading this entire book, I was reading it with a southern accent in my head with the characters voices/accents. And each character had a different accent so I had to keep switching voices and accents. Sometimes I had to cheat and look at who was talking before reading the paragraph so I could make sure that I wasn’t using Sookies voice for Arlene or Eric’s voice for Bill etc. But it didn’t end there because when I would talk to people either on the phone or even talking to Darrin or the dog I would still have a little trace of that southern accent.

What was cool about this book was that while I was reading it I already knew what was going to happen before it happened because I’ve seen the show and I remembered it. Unfortunately, some of the things changed.

Like for example, Tara Thornton and her mother were not in the book, Miss Jeanette wasn’t in there and she didn’t die at the end in Andy’s car and Bill never turned Jessica and he never went on trial, instead he got some kind of vampire promotion in the vampire world that he lives in. Also, there was another vampire named Bubba who was never in the show and he was there when Sookie was getting beat up by Rene who didn’t even die at the end of the book.

My friend Alyce told me that this book was not like the shows and I thought that she was saying that it wasn’t like the shows meaning it had nothing to do with Bon Temps and Bill and Sookie etc. But what she meant was that it read for Sookies point of view the entire time and so you never read anything that happened to anyone in this book that was not around Sookie.

In other words, you are reading from her viewpoint and no one else. Since she can’t see what’s happening to other people, neither can we (as the reader).

I definitely enjoyed it even though it was very different from the show in that respect. I feel like I got a taste of an alternate True Blood. Which by the way, they never mentioned the words “True Blood”. They always said “synthetic blood” and Bill apparently hated it, he preferred to drink Sookie instead.

I loved this book and can’t wait for the next one. I plan on buying each book once every month until June and by then I will be on the 10th book. I don’t want to read all of the books at once, I have many other books that I want to read of different stories so I have to give those books a chance too.

One of the books that I bought for my new Nook is the first Sookie Stackhouse novel, Dead Until Dark by Charlaine Harris.

I wasn’t going to start reading it until today because I got my Nook late at night, after 8pm, and it usually takes me awhile to read a chapter and I didn’t want to read it until I had a fresh start early in the day. However, I was impatient so I started reading it.

One of the reasons I wanted to read it is because it’s the first True Blood novel. I knew that it would be different from the actual show because people keep telling me that it has more detail and that’s almost always the case with books. A friend of mine told me that they are nothing like the show and that it has nothing to do with True Blood.

I’m very happy that this first novel is turning out to be exactly what I had hoped it would be but I’ve only read chapter 1 so far. While I’m reading it I had the actual voices and accents of the characters from the tv show playing out each scene in my head with visuals.

When I’m reading I try to give the characters voices that I would imagine that they sound like but sometimes if I can’t imagine it then it’s just my own voice in my head. But I do try to picture the characters and their surroundings as I’m reading because it gives me a better idea of what I’m reading so I understand it better.

Sometimes I can’t and it confuses me and I tend to take longer reading but it seems that since I already have a visual from True Blood on HBO I tend to be able to read faster.

One of the things I do hate about reading and is why it took me 35 years to start reading is that books have big words and it seems like you would need a college education to understand what you are reading. What I like about these books are that I have not come across this issue. Although, now that I have a Nook if I do come across a word like that then I can look it up and get the definition then continue reading.

Obviously this is not a book review and who the hell am I to give one, I’m just saying I’m reading it now and I’m very happy with it and happy I have it on my Nook.