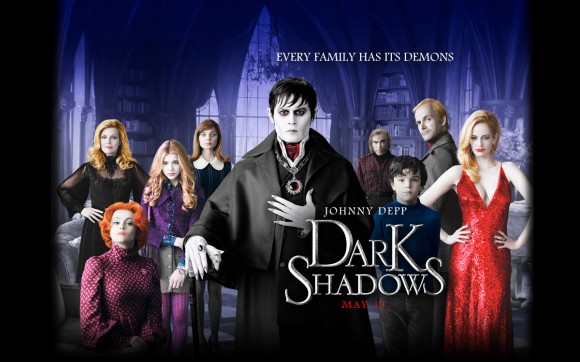 I have been waiting for Dark Shadows for a few months and I couldn’t wait to go see it.  I never had the chance to see the original Dark Shadows because I wasn’t born when it first began and I was only a baby when it ended, so I never got the full experience.

I actually didn’t even know about it until I saw an episode of King and Queens when it was brought up because there was a convention that Spence (Patton Oswalt) was going to go to but his girlfriend wouldn’t let him go only because Carrie (Leah Remini) told her to stand up for herself which turned her into a crazy control freak.

Darrin told me when we were leaving the theater that this movie had gotten a few bad reviews.  Well guess what, they can suck an egg because this was a good movie.  Anything with Johnny Depp is going to be awesome and I really don’t listen to those reviews anyway.

Netflix has the original series, I don’t know how many episodes they have, but it says they have all 4 seasons.  I looked it up on IMDB and it doesn’t say that it has more than 1 season, it just shows 1966 – 1971.  I tried to watch it on the internet but I could only find 12 episodes which were dated in 1966.  It was a 5 day a week show so there are going to be a ton of episodes to watch, 1225 episodes to be exact since that is how many episodes IMDB says there are, luckily they were only 30 minutes long.  Then go check it out on Hulu because there was a remake of only 12 episodes from the 90’s.  So that should be quite interesting to watch.

I saw an interview on TV where they said that Johnny Depp was in the original series as the little boy.  Well, he was born in 1963 and the show first began in 1966 so it was possible, but he would’ve only been 3 years old.  Well, I scrolled through the list of cast members and his name was nowhere to be seen.  I then went to his IMDB page and his career began in 1984 with a Nightmare on Elm Street.  I know this is not even worth mentioning since it’s not even true, but you know, it’s something they said on TV and well, there you have it.

When you go, get your picture taken on one of the displays for Dark Shadows like I did…