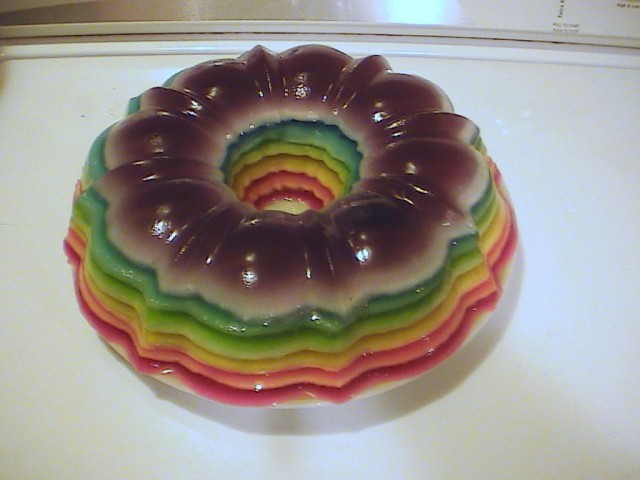 Last night was the Christmas Potluck dinner with PFLAG of Bakersfield.  I was so excited to bring in my Gay Pride Jello mold and nervous at the same time because I have never made one before.  I took it out of the mold at the house for this picture but then put it back in to go to the church.  We got there and flipped it out onto the plate and all was good until people started cutting into it.  The layers didn’t stick so they started coming apart.  Oh the humiliation!

Apparently nobody really gave two shits about the fact that they didn’t stick because there wasn’t that much left on the plate when we left.

We have never been to a pot luck together that didn’t involve his family reunions so Darrin was pretty bored.  I figured he would have gotten up and started mingling with people, I mean, he does that all the time so I was shocked when he picked this venue to become shy.  I on the other hand am always overly shy and never even look at anyone much less get up and walk around.  I do when I know people but I barely knew any of them.  The only way to do that is to continue to join in these events so I can get to know them better.

I did meet a few people who ended up becoming friends on Facebook with me.  One of them just so happens to share the same name with my first boyfriend, although I’m pretty sure it’s not him because my first boyfriend was deaf and this guy isn’t.  Unless there was a cure I didn’t hear about.

During one of the PFLAG announcements, the guy who had the Mic, named Ike who commented at our table how our names are Mike and Ike… you know, like the candy?, anyway he was naming names and telling people who they were yadda yadda yadda and he came to me and I was like whoa dude, I’m nobody yet lol.  But he mentioned me because we were new there and I made a comment to him at our table about how I never even knew Bakersfield had such a huge gay population.

Anyway, I had fun and I hope to be invited to more events.  Whether I will be able to go is another matter. 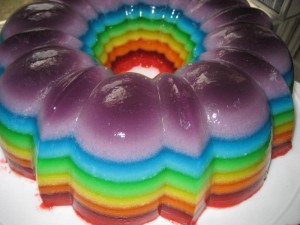 A few weeks ago I was sent an invitation to a pot luck here in Bakersfield at Grace Episcopal Church.  I don’t normally go to church but since I am trying to be a part of the gay community in Bakersfield, I figured I would pitch in with something.  What better dish than a gay pride jello mold?  Of course I have never made a jello mold in my life so I’m hoping this works out so wish me luck lol.

I found the idea because I was curious to see if it was even a real thing and I found an image.  I also found a recipe on a typepad blog called Porter House complete with pictures for all of the steps.

They don’t show any measurements or what size boxes you need.  The instructions just say to use half of the jello then use the other half with the yogurt or cool whip.  Of course I had to pour water into the mold to make sure I knew how much it could hold so I don’t make any mistakes.  Mine holds 13 cups so I can do 2 layers of each color which is 1 cup each layer.  It doesn’t have to be filled to the top.

I will be using cool whip because I’m not a huge yogurt fan.  I’d rather use something light anyway because this thing is going to have so many calories and I don’t want to make everyone fat lol.

My gay pride jello mold is finished but I have to leave it in the mold overnight.  I will take it out tomorrow before we go to the church so I can get a picture then.  It took me 3 hours to make so it better not fall apart when I take it out of the mold lol.  We will see tomorrow.

We have recently suffered the loss of a great friend and family member; Chips cousin has unexpectedly and wrongfully passed away at the age of 62.

I first met Vedra in the mid 90’s when Darrin and I would travel from Hollywood to Bakersfield to visit his mom for Mother’s Day. Every year Vedra would send a flier in the mail telling us about the family reunion and pot luck in the park and it was something that I always looked forward to, not just for the good food but to see her since we clicked so well.

We moved to Bakersfield in 2000 so we were able to see her more than just once a year but little did I know, she only lived 2 blocks from us.  When I learned that she lived so close, we started to see her more often and we met her life partner Venda.  Next thing you know, we’re all trading birthday gifts with each other.

The circumstances with which Vedra has left this world is very painful and I will not go into any details as I would like this to be a celebration of her life but let’s never forget the tragedy for why she is not with us today.

There won’t be a funeral but there will be a celebration of life party at one of Vedras sisters house in mid November.  I like celebration of life parties because you aren’t just mourning her death but also celebrating her life.  I have been to 3 such parties in my life and it’s a better way to say goodbye with a smile and a tear at the same time.

We will miss you and never forget you Vedra.