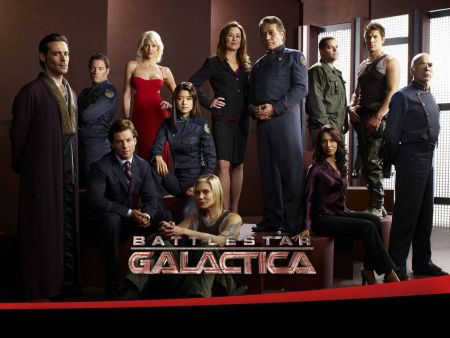 During the season premier of Doctor Who this past Saturday, BBC America played a commercial for the show Battlestar Galactica coming this summer on June 18th.  I was like whoa, I finally get a 2nd chance to watch it.

You see, I didn’t watch it when it was airing on the SyFy channel because I just had too many shows so I was purposely not watching some of the shows I really wanted to watch because it was just too overwhelming.  The issue for me was that it was on during another show and despite the fact that it repeats, I just didn’t give it a chance.  When it ended they spun it off into Caprica and I didn’t watch that one either because I knew I was lost by not seeing Battlestar Galactica so I just didn’t bother.

Well now that BBC America has acquired Battlestar Galactica from NBC/Universal, this summer I finally get my chance to watch it.  So that’s something to look forward to this summer on Saturdays.

I watched Battlestar Galactica in the 70’s when I was a kid, it was one of my favorite shows so you would’ve thought that I would’ve made time to watch it.  I didn’t but now I can so yay me.

I wake up every morning with Klly 95.3 FM here in Bakersfield and this morning I woke up listening to what seemed like an odd conversation with the hosts Danny Hill and Niki Reyes.  They were talking about how overly sensitive people are of what they talk about on the radio and even post on Facebook.  I woke up during their conversation but this is what I got from it.

Danny Hill must have said something about going to the circus on the radio or on Facebook and people went over his head and started posting negative comments about it on the radio stations Facebook fan page saying he is supporting racism/slavery and animal cruelty.  First of all, how does going to the circus support racism and/or slavery?  And secondly, he went to an animal free circus.  They have clowns and acrobatics, they didn’t have any animals.  Clowns and acrobatics get paid so they aren’t slaves.

I didn’t see a negative comment from a “fan” but Klly did make a post saying “Relax everyone, it’s a animal free circus, just clowns and tight rope walkers! It’s the new trend!”

Then he was talking about how they were talking on the radio about a list of Hollywood’s sexiest jewish women.  He mentioned how ridiculous the list was when they came across Sarah Silverman.  I mean, she is anything but sexy lol.  People took that as he was making fun of 1 jewish people and 2 women.

His intentions weren’t to make fun of the people but instead of how dumb the list was because they added a person that he thought was FAR from sexy which I happen to agree.  If you add a square into a list of rounds then that list is ridiculous and it should be made fun of for existing.  If you can’t have all beautiful women then why bother making the list?

It would be like if they added the Nick Nolte in a list of hot men with men like Ricky Martin, Tom Cruise and Jake Gyllenhaal, etc.  That list becomes stupid because you have added 1 person who doesn’t belong.  See what I’m saying?

He was talking about how overly sensitive people are and how they turn everything you say around and make it negative.  Which is so true.  People aren’t focused on anything positive anymore, they only focus on the negative.

Listen, when I think about the circus, the things that pop into my head are clowns, popcorn, peanuts and very nimble people.  Not racism and animal cruelty.  But that’s just me.  I don’t think about all of the things that are negative with a circus because I’m not a troll.

He said that (hypothetical) if he talked about going to Baskin Robbins that people would turn that around and tell him that he supports diabetes.  I can so see people turning that around because people have nothing better to do than to leave nasty negative comments about anything that you say.

I’ve been to Baskin Robbins and they don’t support diabetes because they are so stingy with their ice cream that you wouldn’t be able to get diabetes from them.  They give you this tiny little scoop then charge you $2 for it.  If that one little tiny scoop gives you diabetes then you need to be studied.

I wrote a post last year about a can of peanut butter and jelly sandwiches called Candwich and people were leaving one negative comment after another about how I’m promoting obesity in children.  How does PB&J promote obesity in children?  My mother gave me PB&J sandwiches all the time in my childhood and I never became obese.  I didn’t become obese because I was an active child.  I didn’t sit around playing video games all day long and we had video games back then too.  I had a life outside of tv and video games.  We actually enjoyed the sun and the park and riding bikes and having fun when I was a kid so none of us ever got fat from a peanut butter and jelly sandwich.

I know there are better things to focus on in this world like how there are terrorists committing suicide and killing hundreds of innocent lives for their own agenda.  We are at war right now with at least 2 countries that I know of and there was a recent tragedy in Japan that we could also be focusing on.  Isn’t there something better that we could be talking about instead of turning on each other at the drop of a word?

I am sensitive about gay rights.  If I see someone doing or saying something wrong to gay people I go off.  But if someone is making an innocent joke then I can certainly laugh along because I know how to pick my battles.  I’m not so overly sensitive that it’s all I focus on in my day-to-day life.

People really need to pick their battles and stop focusing on such negative things.  The circus is a good thing and a list no matter who is in the list can sometimes be silly so why can’t we make fun of it?  I mean really people, get a life!