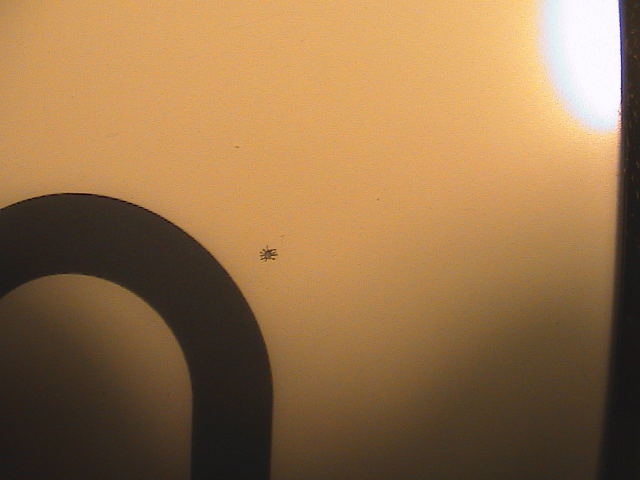 I picked up my Nook on July 1st to load up a new e-book to read and was a bit confused when I noticed what looked like a little bug icon on the screen.  When I turned it on it started doing a system update so I thought that maybe that wasn’t a bug but an asterisk (*) but when the update completed, the symbol was still there.  Then I thought, maybe I have a virus and for some odd reason its showing me a bug icon (LOL).  I haven’t been online with it besides going to the Nook store.  How could I get a virus?

I looked at it in the light and turn it so I can see the screen and I see a little dot on the outside.  What I think happened is that something fell on the screen and that little black bug like image is e-ink from the tiny crack in the screen.  I don’t remember anything falling on it.  I usually have it sitting upright and not laying down on the desk so I don’t know when that happened.  I did have it laying down a few times but it’s not always laying down.

So I called Barnes & Noble and they have me do some troubleshooting.  She has me turn it off then hold the button for 20 seconds 6 times (twice).  Nothing happens because it’s not a software error, it’s a crack on the screen.  I told her that and I guess they have to troubleshoot just to make sure.

Thank goodness I have a warranty to cover this because if I didn’t I’d be stuck with this forever.  She told me that since it is covered on my warranty I’ll get a replacement and it will only take 3 days to get to me.  But before they send a replacement to me they have to take my credit card number so that if they don’t get my Nook within 14 days they can charge my credit card for the replacement.

That was July 1st which was a Friday.  They didn’t actually ship the Nook until July 5th and I’m supposed to get it today, July 8th.  So there is 1 week, I have 1 more week to get my Nook to them.

I had to unregister my Nook and remove everything I put on it like screen saver and wallpaper images and ebooks.  While I was at it I deleted my contacts (which I never did anything with) and all of my shelves.  It’s all ready to go.  It’s basically all in the box waiting to go out.

My replacement Nook finally arrived today and it wasn’t a refurbished one, it’s brand spanking new.  Wow, that was surprising.  I thought for sure it would have a few scratches on the case or there would be some blemish but it’s shiny and new.  It even smells like it just came off the production line.

I waited until now to call UPS to pick it up because I was under the impression that UPS was going to be delivering it.  They sent me a UPS tracking number to track it and it said it was in Bakersfield yesterday.  I figured, I could open the box, take the Nook out and replace it with my Nook, tape the label on it and give it back to the UPS driver to ship out.  But instead, UPS handed it over to the post office to deliver to me today.  So, that went out the window.  I had to call UPS today and they charged me $8.16 on my debit card to pick up despite the UPS label that Barnes & Noble emailed me to print with its own tracking number.  I thought for sure they were paying for the shipping.  Oh well.

I scheduled the pick up with UPS and they are going to come get it on Monday.  The cut off date is Thursday, that will be my 14th day so if they don’t get it by Thursday then I may see a charge on my checking account.  But I’m sure once they get it, they will remove the charge so I’m not worried in the least.

I am very satisfied with my Nook and with the way they handled my situation.  I highly recommend anyone interested in buying an eBook to get theirs from Barnes & Noble.  It doesn’t matter which Nook you buy, know that if anything happens, even the slightest problem, if you have bought a warranty with them you will get a new Nook.

So now I get the fun task of hooking this new Nook up to my computer with the USB cable so I can put my books back in there and my screen saver to match my skin.  Fun times…