About 2 months ago, I was in the back yard trying to get it cleaned up so we could use it this summer.  I had big plans for pulling all the weeds, tossing all of the junk and pruning the orange tree so it wasn’t taking over the place but still have it so we could continue to enjoy the oranges year after year.

One day as I was out there with my ho… er um I mean my hoe, you know, a gardening tool… anyway, I was pulling weeds with the hoe and I ran into a snag.  The dirt underneath the weed was soaking wet which made it virtually impossible to pull on the roots of the weed because I was pulling huge chunks of earth instead.

Darrin called a plumber to look at the leaky pipe.  He came and he did something which seemed to have stopped the leak for a day or 2 so he called the plumber and said never mind, I don’t know what you did but it stopped leaking.  He spoke too soon.

A month later I noticed that the water was leaking in a 2nd spot.  I thought it was coming from the original leak, I was almost sure of it too.  I could see in my head that the water had eroded the earth under the cement over time and was making it leak out in that other spot.  But, I’m no plumber so I can’t really diagnose the problem in my head lol.

Darrin told me that he was going to get the plumber in here last week but he forgot to call him to make the appointment until the day before and naturally you can’t expect him to just cancel his appointments so we had to wait another week.  He came yesterday with his son, they were here for about 7 hours.

He dug out the sidewalk and all the dirt, found the problem and fixed it.  Turn the water main back on and that second place is still leaking.  So turn the main back off and destroy our patio floor to find that leak.  He thought that it was coming from another place on the other side but he was wrong.  He was able to patch it and they turned the main back on and another leak comes and he patches that too.

Turn the water back on and everything is good.  No leaks anywhere WHEW!  Our back yard is really bad though, now we need to have new cement poured to fill in the places that there is no concrete floor.  Either that or an area rug.  Or we can put plants in those spots lol.

The next morning, this is the 2nd leak.

The next morning, the original leak. 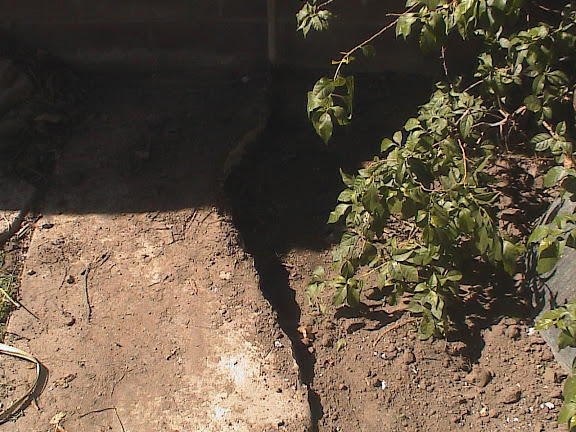 The next morning, an area that they thought they would have to dig but turned out it had nothing to do with the 2nd leak.

It sucks having all of these open spots but it really sucks having a leak so I think I will settle for not having cement over a leak any day.  I’m going to be fixing up the back yard over the next few months to get it looking good now that everything is back to normal, somewhat.  Eventually we will have that all patched up with new cement before we have any visitors to have a BBQ.

So, my project went away but now it’s back.  YAY!