There are a lot of stray cats in our neighborhood and most of them are feral so they don’t really come up to me.  People are always wanting to feed them and when you feed them they become tame but those people don’t take responsibility for them.

There was a black cat who Darrin wanted to feed and he told me to feed him so like a dummy I went to the grocery store and bought some cat food.  Then this orange one came along and he decided that we’re his new family.  I didn’t want to feed him because I figured if I didn’t feed him then he would go away and find someone else but he didn’t.

One morning I woke up and was going to go to the back yard to change his water and put more food in there and he was inside of our patio.  It’s an enclosed patio and at first I thought Darrin put him in there but when I asked him he didn’t know what I was talking about.

The next day I went out there and he was in the patio again.  I couldn’t understand how this Houdini was getting in.  Then it hit me, he is getting up on the roof of the garage and he finds his way to the screen that is supposed to be tacked onto the wood below the gutters and he jumps down onto the floor of the patio.

Now when I go out there to put him outside he doesn’t want to go.  I have to trick him with food to get him to leave but he knows my tricks lol.

I don’t want another cat!  I had a cat for 12 years, I feel like I did my time, why should I have to spend another, goodness knows how many years, having to clean another litter box?  The problem is, I have a very weak immune system, I can’t be scooping poop and breathing it every day.  I was always sick when we had our cat Shanaynay (rest in peace) and I vowed I would never go through that again and now I feel like it’s being forced on me.

I tacked the screen back on which wasn’t very difficult to do.  I watched the cat jump onto the patio roof in our back yard and jump onto the garage roof then saw where he was getting in.  There is a ladder leaning up against the wall where he gets in so he sort of climbs down to the top of the ladder then jumps to the ground.  It’s quite hilarious how he figure that out.  But, I don’t want the other cats to get the same idea so I had to tack it down again to close that off.

This cat has learned to live with staying in our back yard all the time.  I feed him in the morning and at night and he’s very happy.  When I take the dog out at night he is out there and wants to be petted.  He and the dog are friends now which is sweet because our dog used to try to chase cats when she saw them.

I told Chips case worker about the cat and the first thing she said was “stay away from the poppy” which I already knew.

I hope he finds a new home.  It’s not that I don’t want him because he is a very sweet cat, it’s just I can’t afford him and I am allergic to cats so I really shouldn’t have him around me.  I don’t regret the 12 years that we had our cat Shanaynay because I loved her to death but I won’t do it again.  I’m happy with just having a dog lol.

This is a Sponsored post written by me on behalf of T.G.I. FRiDAY’S for SocialSpark. All opinions are 100% mine.

Are you tired of the boring freezer dinners at the grocery store but don’t want to have to spend a fortune going out to a restaurant?  YES!  That is a question I ask myself practically on a daily basis.  I am so excited that T.G.I. Fridays meals are available at the grocery store because I love going to T.G.I. Fridays but we don’t get to go there very often.  First of all, they are so popular that it can take half an hour or longer just to get a table and I really hate waiting.

My diet has gotten so boring and I’ve seen these T.G.I. FRiDAY’S “Entrées for One” in the freezer section at Target for only $2.79 each and I bought a couple.  I was actually quite excited when I saw these because it gives me the chance to eat restaurant food at home.

I bought the Sizzling Chicken Fajitas (picture above) and I’m not really a huge fan of onions or bell peppers but if they are cooked enough then they don’t really bother me.  I figured that T.G.I. Fridays wouldn’t give me under cooked food so I took the chance and I’m glad I did because it was really good.

I also bought the Grilled Chicken Mac & Cheese (left picture below).  If you know me then you know that I am a macaroni and cheese fanatic.  I have loved mac and cheese since i was a kid and I think it will my be my favorite until the day I die.  The other brands in the frozen section are good, one brand in particular is my favorite but it’s so expensive.  The T.G.I. Fridays grilled chicken mac and cheese is SO much better.  It’s not too much food and it has chicken.  The cheese is a different flavor which is perfect because it’s not so boring.

I also bought some T.G.I. Fridays snacks.  I bought the potato skins with cheddar and bacon and steak quesadillas. (right picture below).  Hey, we can’t have T.G.I. Fridays without appetizers.  I mean seriously.

Hey, did you know that T.G.I. Fridays is having a Fun Freezer contest on their Facebook page?  All you have to do is decorate your freezer, take a picture and enter it in the contest and hopefully win one of a few prizes, it’s really that simple.

So what are you waiting for?  Go to the freezer section of your grocery store and pick up some of these “entrees for one” for dinner tonight. 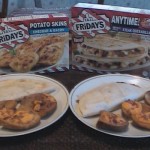