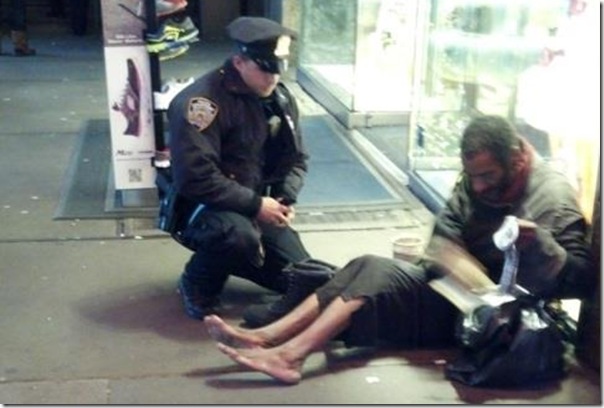 I was so touched when I read about the story of a police officer in New York City giving this homeless man socks and a $75 pair of Sketchers boots.  According to police officer Lawrence DePrimo, a two-year veteran of the NYPD, “he had blisters about the size of my hands.”  He felt sorry for the guy so he did a good deed and he paid with it out of his own pocket.  Bravo!

See, I was homeless when I was a teenager and when I was in my early 20’s, so any time I see anyone giving so generously to a homeless person who never asked for anything, it gives me hope.  However, this homeless man, now identified as Jeffrey Hillman had allegedly “sold” or “gave away” his new shoes, according to an article that I read.  Whether he did that or not didn’t diminish the good deed that Lawrence DePrimo did.  I still have faith in humanity.

I am just now finding out that Jeffrey Hillman isn’t homeless.  According to CNN…

“Jeffrey Hillman, who served in the military, is eligible for support through the federal Housing and Urban Development’s Veterans Affairs Support Housing program, Diamond said.

“Thanks to that program, Jeffrey Hillman has a Bronx apartment that has been paid for outright, Diamond said, emphasizing there was no need for the man to “panhandle on the streets to pay rent.” Diamond would not give any details about Jeffrey Hillman’s use of the apartment.”

The thing is, even knowing this “homeless guy” has an apartment, it doesn’t diminish the good deed done by Lawrence DePrimo who had no idea that the man he was helping didn’t need help.  We shouldn’t all lose our faith in humanity just because this homeless guy turned out to be faking being homeless because maybe he gets enough money to pay his rent, but what about his food?  Look at him, he’s skin and bones.  Perhaps he really doesn’t have shoes, I mean, according to the officer, he had blisters about the size of his hands on the bottoms of his feet, so maybe he doesn’t get enough money to get by.

I am not defending him, I’m just saying don’t throw your hands up in the air and say this whole thing was a fraud because the cop was still doing a good deed, and no matter what the outcome is, it was still a good will story and we needed some good news after hurricane Sandy.  Don’t give up on believing in humanity just because the guy who was surprised with a gift wasn’t really homeless.  The cop didn’t know that and he didn’t give him the boots for a publicity stunt, and the homeless man wasn’t expecting to receive any gifts that day.  According to the article on Huffington Post, “He smiled from ear to ear,” DePrimo said. “It was like you gave him a million dollars.”

What I’m really saying is, don’t be so skeptical about everyone because there are still some good people out there in the world doing good deeds.  They say “one apple spoils the barrel” but that doesn’t mean you should give up on everything else from here on out.  I still say that cop deserves a medal for his good deed and I thank him for his service and his gift.

This is a Sponsored post written by me on behalf of © Blue Shield of California for SocialSpark. All opinions are 100% mine.

Everyone has to visit the doctor from time to time, some more than others depending on what ails them.  I have to go once a month because I have serious health issues, but sometimes I have minor issues that I should discuss with my doctor, but I don’t always because it’s a bit embarrassing.  Even though he is my doctor, it still makes me blush to have to talk about constipation, diarrhea or whatever embarrassing things you have to talk about.  Sometimes you want to go to a website to check things out before speaking to your doctor, and Dr. Jim and Bob are probably the best people to help because they make you giggle.

Check out Dr. Jim and Bob’s Fun & Helpful Health Advice on Facebook and watch all of their videos.  Every day, Dr. Jim and Bob scour the internet looking for people who have problems that they for one reason or another discuss, and they leave a reply with a link to one of their videos.  Perhaps the health issues I have blogged about have stumped them and they just don’t know how to respond.  Yeah, I’m sure that’s it.  Hmmm…

Dr. Jim and Bob are with Blue Shield of California which is a non-profit company.  They offer easy access to chiropractors, acupuncture and other alternative care.  They offer access to great doctors and they have a wide range of health plans that you can actually afford.  Imagine that.

I think I have benefitted from some of the advice that Dr. Jim and Bob have given in their videos.  One of the issues I have is with heartburn and Dr. Jim and Bob discuss how perhaps I get heartburn because I might be eating too much or the wrong foods, or perhaps maybe I just need to go on a diet and lose some weight.  Are you calling me fat Dr. Jim?  LOL just kidding… or am I?  Watch the video, it’s hilarious.