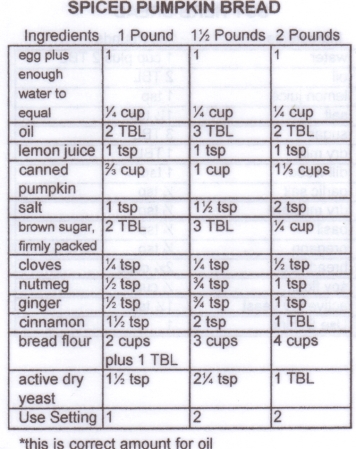 I bought a bread machine a few years ago from a thrift store for only $6, and I think it was one of the best investments I’ve ever made because I get to enjoy specialty bread whenever I want, at a fraction of the cost.

Every holiday season from October until December I make Spiced Pumpkin bread, and I thought I would share the recipe.

This is the recipe that came in the book that I had to download since it didn’t come with the bread machine. What do you expect? I found it in a thrift store. I was lucky it had all the parts and that it actually worked. They had some better looking machines that were missing the kneading paddle. Is that what it’s called?

I had to experiment with some of the recipes because sometimes you might get soft fluffy bread, while other times it might be hard and will leave a brick feeling in your stomach. If the bread is too hard, it’s because it didn’t have enough water. If it falls apart, you put too much water in it. This particular recipe says to add 1 egg and enough water to make 1/4 cup. Well, I learned to add 1 egg, plus 1/4 cup of water, and no more water after that.

There are some recipes that have raisins in it, this one does not, but I like to add raisins to it anyway. I don’t add the raisins in the beginning because it turns them into dust. I wait until the machine is finished kneading the dough, then I add the raisins, then the machine starts to knead again for about 15 or 20 minutes before turning off to let the dough rise.

One thing that I don’t like to do is to let the bread machine bake the bread because the container that it is in doesn’t give you a normal shape loaf of bread. I just let it knead the dough, then when it’s finished, before it allows it to rise, I remove it from the pan and put it in a regular bread pan and put it in the toaster oven at 150F for 45 minutes to rise, then I turn it to 350F to bake for 45 minutes.

I love this bread for 2 reasons. 1 it has a pumpkin flavor, and 2 because it’s sweet from the raisins. I like to make peanut butter and jelly sandwiches with this bread more than anything else. It just makes it better. I have had ham and/or turkey sandwiches, but nothing beats PB&J.