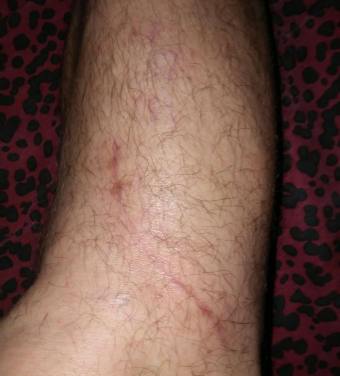 I had a doctor’s appointment for my broken leg. They took new x-rays, which to me looked exactly the same as the one from my last visit, so I didn’t bother to take a new picture. The doctor was shocked to see that I was walking on my own since the last time he saw me I was still using the wheelchair. I was using a cane, and he told me that he’d like to wean me off the cane, at which time I showed him that I could walk without the cane. I told him I only use it when we go out in public if I’m having pain and limping a lot because it hides and explains my limp to people. He said perfect, don’t use it if you don’t need it.

So I took a new picture of my scar to show that it’s almost disappearing. It’s flat, not bumpy. I’m sure it will eventually disappear, even though I would love for it to stay. I know that sounds odd, but I like it lol. It’s like a battle scar, like a trophy. I show it off to anyone who will look. Of course it helps if I wear shorts, or sweat pants so I can lift the leg.

The doctor told me that he is sending me back to physical therapy, which is awesome because I miss going there. He also wants to see me in 3 months for my final visit. I wanted to ask for a new prescription of my pain meds because it still hurts. It hurts when it’s cold outside, but it also hurts like the dickens when I wake up in the morning. You know how when you wake up and your body stretches all the limbs? Yeah, that hurts lol.