Last night while we were at Barnes & Noble, after I had already paid for the Nook, Darrin asked if I bought a cover for it. Well naturally I didn’t. I had only saved up just enough money to buy the Nook. I didn’t even buy the extended warranty (which I have 30 days to buy), how could I afford a cover?

We went over to the Nook display and I was looking at their prices. Some of them were $50. Some were as low as $10 but those were rubber and didn’t cover the book like a book cover. I don’t want that. We left with the thought that ‘I will eventually buy one’ in mind.

I’m sitting here looking at the Nook and thinking, I really wish I had a cover for it because now that I’m thinking about it, it starts to worry me. How can I possibly feel safe with the limited warranty that I get if I don’t have a cover to protect it if something happens.

As I’m looking at the covers available I’m noticing that they are basically just cardboard with plastic or fabric sewn onto them. I could do that. Could I do that? Yes, I think I can.

For some odd reason we still have the big box that Chips HDTV came in. The cardboard is really thick but it’s not too thick and it’s not too thin either. I want the cover to be strong enough that it won’t bend easily. I cut the top flap and the side in a book V shape. Although I needed to add another bend because this thing is a bit thick and I need it to wrap around in more of a U shape.

I have these book covers that I bought at the grocery store in 2007 when the final Harry Potter novel came out. Luckily it came out around the same time they started stocking the back to school stuff. It’s a stretchy fabric so it starts out small but stretches enough to fit a big history or science book. I bought 2 of them, black and red. They were cheap so I bought 2. They had some other colors but black and red were my favorite.

I’m really glad I’ve held onto them all these years because I was able to finally utilize one of them. I got the cardboard cut up perfectly so it’s just the right size for the Nook. I stretched the book cover over the cardboard and although it’s a bit long it fits and it kind of looks cool at how loose it is. It looks like it was on purpose that it’s so loose.

Ok, now I have a cover but how the heck is this thing supposed to really hold it? I’m gonna need some corners to hold onto it. How do I do that?

Solution. You know Rexlace? You know, the stuff that you use to make those cool key chains? Well, in 2004 (I think) I remembered how I learned how to make those key chains when I was in the cub scouts and I wanted to see if I could learn again. I bought a bunch of rexlace, even megalace. I thought the megalace would be really cool but it turns out that it was even more difficult to make that I thought.

I’ve held onto all that rexlace and megalace all these years. When I buy craft stuff, I may not use it all up right away but eventually I will have a need for it and tonight I had a need for it.

I have some black megalace and I pulled some of it out and held it up to the corner and measured how much I would need and cut 4 pieces. Ok, I have the pieces but how to sew it on? I started using a needle and thread but that was very difficult and time-consuming and the thread kept breaking.

Solution. I have a sewing awl. AHA! That works perfectly because the needle is thick enough to go through the cardboard and the handle makes pushing it through a breeze and the wax thread is thick enough that it will hold better than plain old sewing thread.

It took me awhile and since the thread was black, the megalace was black and the book cover was black, it made it very difficult to see in the poor lighting in my room. But it worked out. I have my book cover, the nook stays in place and I saved $50. 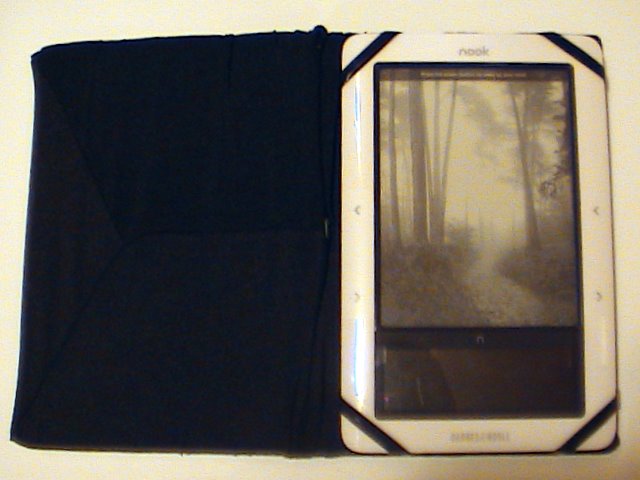 The only issue that I have is that the cover won’t stay closed so in order for it to stay closed I have to lay it down so that the weight of the Nook lies on the front cover to keep it closed. That’s fine though. I may eventually figure out a way to sew a latch on the front and back, like a buckle or something. I don’t know. I will figure it out, I always do.

So now my Nook is protected when not in use and when in use as well. I am very happy and satisfied with my handy work.

I was browsing this website which features a concept design for building a little trailer home for a bicycle and one of the commenters linked this.

Everyone Deserves A Roof aka EDAR

It’s a cart during the day that you can roll around to collect your cans and bottles for recycling or maybe even perhaps to store your belongings in then at night it’s a tent to sleep in.  If you do decide to go to the shelter you can sleep in your EDAR and have privacy instead of sleeping on a cot with everyone else.

When I was kicked out of the house by my mother when I was 17 I was homeless.  I was living place to place for short periods of time until the person I was staying with no longer wanted me there.  Eventually I had to go to a shelter in Simi Valley and stayed there for many months until the program ended for the summer.  By then I was back on my feet and renting a room in the home of a Vietnamese family.

So when I hear about something like this it makes me happy that there is something to help the homeless during the time they cannot go to the shelters.  But the issue is, where can you set it up and sleep in it without the cops opening the flap up and telling you to move somewhere else?

This is a good thing for homeless people in my opinion.