Lego’s were my babysitter when I was a child.  You could literally put me in a room with a bunch of Lego’s and leave for a couple of hours and come back and I would still be in the same spot building with my plastic bricks.  I have such an emotional connection with Lego’s so it’s no surprise that when they came out with video games, even as an adult I was attracted to them.

I can remember when I first discovered the Lego video games.  We were in a Game Stop at the mall and I was going through their games looking for a new game and I found Lego Star Wars II: The Original Trilogy.  The clerk told me that in June that year, which was 2008, Lego was coming out with a new game called Lego Indiana Jones.  Naturally I had to pre-order it.  When I did get it, it came with a free t-shirt which I wore all the time.  I wore it so much that it is a bit faded and it has many holes in it.  It’s been retired and is hanging in my closet.

The next game was Lego Batman, which I naturally pre-ordered and it was released in September of the same year.  I got a Robin keychain. 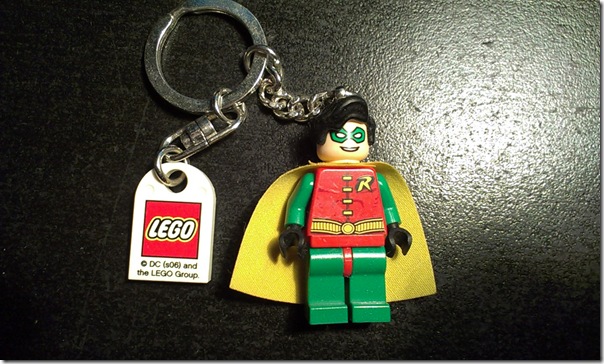 My reasons for not buying some of the Lego games weren’t because I didn’t want to play with them, but more because I couldn’t afford to keep buying new games at their high prices.  I figured I would wait for them to go down in price, or until I had a gift card.

I have been doing surveys with e-rewards.com for many years and have gotten a lot of games for my PSP with Game Stop gift cards from e-rewards.  In fact, 90% of the games that I do own are from doing surveys.  Surveys have helped keep me gaming for many years, but for some reason they stopped coming, and when they did come again, I wasn’t interested in doing them anymore out of boredom.

Recently I decided to do some new surveys and realized I had $60 in my e-rewards account which was more than enough to get a new gift card for Game Stop.  Unfortunately they raised the cost of the reward from $50 to $75 for a $25 gift card.  I’ve been doing surveys every day since then so I could have $75 in my account so I could get my gift card and I finally did.

We went to the Game Stop at the Valley Plaza yesterday and unfortunately, they don’t carry PSP games anymore.  The guy said that if I wanted PSP games, I would have to visit their Rosedale store or the East Hills mall.  Bollocks!

I recently got a $35 gift card from Amazon for advertising on my blog so I decided to buy Lego Star Wars III: The Clone Wars.  I decided to go to GameStop.com with my $25 Game Stop gift card and I bought the 2 remaining Lego games that I was missing.  When those come, I will have all 8 Lego games for the PSP.  I got free shipping with my order of $25 or more, and it was more.  With taxes it came to $30.07 so all I had to pay out-of-pocket (or out of debit card lol) was 5.07.

I have been playing Lego Star Wars III and I do love it.  I believe I am 10% in the game now.

I love the Lego games and I can’t wait to play the new ones.

Today was the day that I volunteered for the Human Rights Campaign.

I got an email last week telling me that they will be in Bakersfield for Gay Pride this weekend and they were looking for volunteers.  I immediately thought, Hell yeah I want to volunteer.

I signed up for 1-4pm and of course I stayed until 5 because I didn’t want to leave at all because I was having such a good time.

The people coming up to the booth were just the most friendly people you would ever meet in your life.  Everyone had a smile on their faces.

Apparently, HRC has never been to Bakersfield pride so the event coordinator was thrilled that we were there.  I was shocked to find out that Bakersfield even had a gay pride.  I thought that was so cool and I was really glad I was involved.

What we were doing was we were getting people to fill out the petition for gay marriage for 2012.  If they wanted a free sticker, temporary tattoo, or a canvas bag they had to just fill out the little card or the petition sheet.

We were selling memberships and if you bought a membership you got a free t-shirt, cap, necklace or a bracelet depending on how much you paid for your membership.

I didn’t want to go but I left at 5pm with my “Legalize Gay” t-shirt on and a smile on my face the whole bicycle trip home.

If they ever ask me to volunteer for anything else I will do it in a heartbeat.

Hey, just because I’m not there anymore doesn’t mean I won’t still ask you to help them out. Please visit HRC.org and become a member today to help in the fight.  You know you want to.

I got my Lego Indiana Jones for PSP game today and got a free t-shirt. This game is fun just like Lego Star Wars is. I’m really glad I got a PSP because it’s so cool.

I also bought some artist stuff at Michael’s. I bought “Cartooning Kit for Dummies” and it came with 6 colored pencils, 6 markers which are basically the same colors as the pencils, an eraser and a pencil sharpener. I was disappointed in the pencils because they were very difficult to erase. A regular pencil works better.

It also comes with a little 5×7 sketching pad with 50 sheets. The book is lame, it’s not even a book it’s more of a piece of paper folded a few times. I also bought a book called Superhero Madness which has “45 basic lessons for drawing cool heroes and vile villains”. It’s pretty cool. They also had these booklets that were totally blank so you can create your very own comic book. I bought 2 sizes, a regular typical comic book size and a pocket book size. Each with 28 pages.

I don’t know what I’m going to draw in them but I probably wont use them for a very long time, long enough to know what I’m doing first hehe.