I am very happy today because a few days ago I found out that the person who had taken photos of Christmas lost his fanny pack which had his camera, wallet and 2 cell phones in it but someone else took pictures too.  She took them on a disposable camera so the quality of the photos isn’t as good as a digital camera but who really cares?  I got photos of me with the kids FINALLY!

On the left is baby Noah, in the middle is Andrew and on the right is Jordan then in the back is well, me… 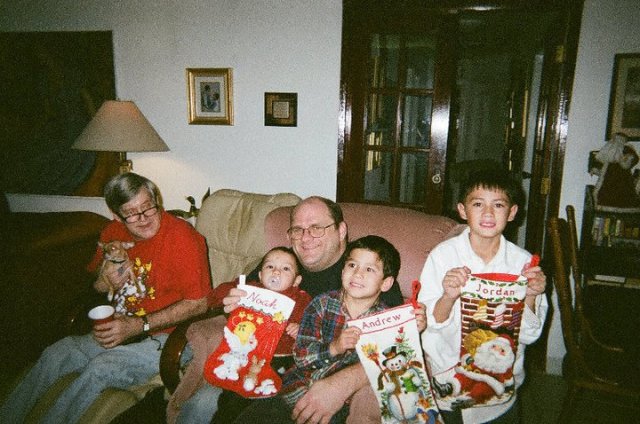 I was really happy with the look on these kids faces when they found their stockings because even though they were empty, they didn’t care because they have a stocking with their names on them to use every year with a cool picture on them.  That was all that mattered to them.

That’s what made it all worth it to me.  The months that I spent making them all boiled down to one thing, how the kids liked them.  It was worth all the numbness and pinching in my hands to see the looks on their faces when they saw them.

I hope they enjoy the stockings for many decades.  Except for Noah because his stocking is a baby stocking hehe.  I’m obviously going to have to find another stocking to make for him.