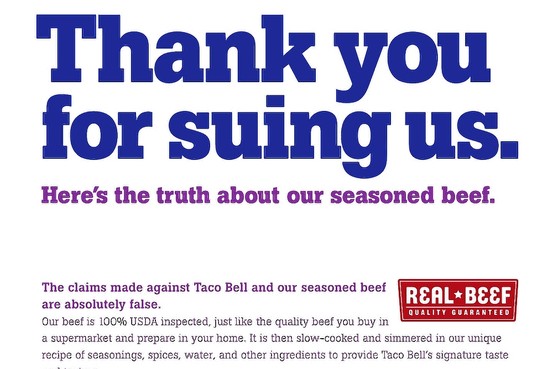 I heard something the other day on the news about some allegations that Taco Bell’s meat is 35% meat and they were saying something about the rest being soy or something.  I don’t remember exactly what they said but I don’t listen to any of that BS.

I’ve been eating Taco Bell my entire life and if it’s the same stuff that they’ve always had before then I know it’s not going to kill me.  If anything, I eat it so often that I have built an immunity to anything that might be in the meat lol.

Guess what we had for dinner tonight?

The Wall Street Journal posted this article today about it.  The meat isn’t 100% beef, it’s actually 88%, the rest is water and spices which gives it flavor.  Go ahead and read the article.

I worked at Taco Bell when I was 17 years old.  Although I didn’t make the beef I don’t really know what spices are in it or how it’s made but I do know how the refried beans are made because I was there early in the morning to blend the beans that were being pressure cooked all night long.  I also shredded the cheese and cut the tortillas into triangles for the cinnamon crispas which they don’t even sell anymore.  They eventually put me on the line so I was assembling the food but that’s as far as I went, I quit after a month and went to Wendy’s lol.

So whatever false information you hear online about Taco Bell’s meat, ignore it because it’s not true.