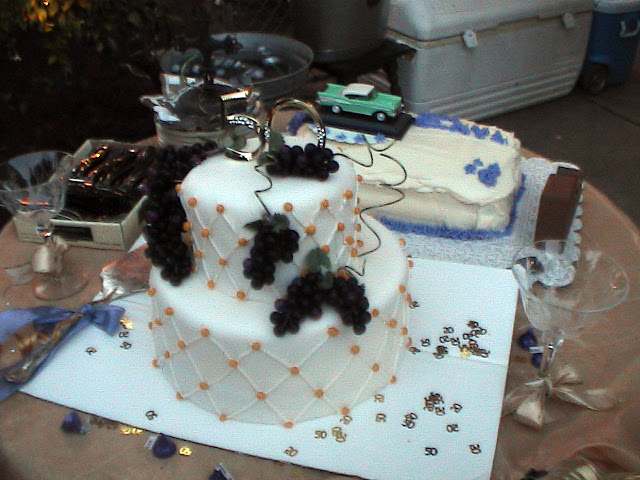 We went to San Diego this weekend to celebrate Chips brothers 50 year anniversary with his wife.  We left Bakersfield on Friday before lunch time, got gas, got food, then got more gas from the food then drove down to San Diego.

Because the I-405 was closed all weekend, the I-5 was congested more than usual.  It’s normally always congested due to LA traffic but it was even more so this time so it took us about 7 hours to get there.

The night we arrived there was nothing to do but talk and reconnect with who was there for a couple of hours before everyone went to bed.  We all got up at 6am and had breakfast before setting everything up for the party.

Since they live on 1 acre of land there was a lot of work to do.  There was setting up tables on the front lawn and setting the tables with the champagne glasses (for Martinelli’s hehe) and the plastic silverware that actually looked silver but felt plastic.  I had all the plates on the table put down before being told it was buffet style, everyone had to grab their plate at the food table.  Oopsie.  No big deal getting the plates stacked up again.

There were candle centerpieces which weren’t really lit up since the sun didn’t go down until after the dinner was all eaten.  There were Chinese lanterns with battery-powered lights in them.  There were 3 large Styrofoam boards with pictures stapled to them which were all screwed to the garage door.  The buffet table had tons of great food to eat.  It was a great party.

They have this block of cement on the side of the house that is meant for a flat even surface for like a picnic table for summer BBQ’s but it’s big enough to use as a dance floor so they rented a wooden floor to put on top of it.  It was really cool and the couple had their first dance on it, actually they shared 2 dances before anyone else came to dance on it.  At first there weren’t anyone on it but eventually there were many people on it.

I don’t dance.  Plain and simple.  In order for me to dance I must have 1 thing, Rhythm, which I don’t have.  I was being dragged to the dance floor and was like whoa, hey no I uh, I don’t think so.  Of course that made her a tad upset and disgusted with me but whatever.  I don’t dance, especially with girls lol.

I sat on the bench near the dance floor watching and people were telling me to come dance and I had to decline.  No means no people!  I did eventually do the cabbage patch in my seat which is about the best I can do.  I’m not a complete fuddy duddy.

The party was very fun and even though I was a bit antisocial because I didn’t really know 85% of the people there I still had a good time.

The cake that you see in the image above was made by one of the family members who is a baker.  She used fondant which I have never actually had before.  I’ve seen them using it on all of those cake shows on tv but I’ve never actually tasted it before.  My first thought was, boy this stuff is hard.  It was very difficult for the person who was cutting the cake to cut it because of how hard the fondant was.  I mean she was having a heck of a time.  I think she needed a serrated edged knife like a steak knife to cut it.

I did like the fondant though, it wasn’t too sweet, although Darrin would disagree with me on that one because he said it was too sweet, then again everything is too sweet for him.  The cake was good too, I don’t know what was inside of it but it had a texture of like pudding in the middle.

I got lots of pictures and I got a few things on video which were very dark since there wasn’t a lot of lighting out there so I’ll have to fix all that in editing on my desktop.  I would like to get other people’s pictures and make it into a slide show with some music and add the videos into the slide show then put it on a DVD and send it to them.  They can add that to their photo album.

I’m glad we went there to share their happy day with them.  I applaud people who have shared 50 long years together.  It’s very rare to find a couple who can last more than a few years, let alone 50.  So that’s pretty cool.

We were given an alternate route to go home which was a really good route too.  We didn’t have to stop once.  I mean, besides stopping at the gas station and jack in the box for lunch.  The traffic wasn’t at a stand still which is what it usually is on the I-5.  We got home 1 hour earlier than we would have if we had gone the way we came.  I’ll definitely have to keep those directions for future visits.

Edit: I don’t know why I said “40” in the first paragraph, it was their 50 year anniversary.