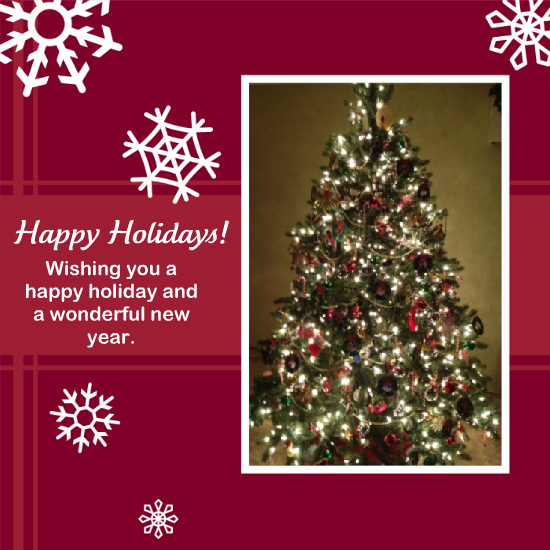 I forgot to send out cards this year.  Oopsie!  So instead of sending our cards out late, this is what everyone is getting lol.  If you are wondering why it’s not a photo of us, neither Darrin nor myself are photogenic (we hate our pictures being taken) so you get to see our tree instead.  Hey, Darrin just got his new iPhone, I don’t want to be responsible for breaking the camera with my image LOL.  No but seriously, I would like to get a picture of us together but I’d prefer in a more professional setting.  Maybe in the year 2025…

Every year since the 90’s, I have spent Christmas with either my family, or with Chips.  This year we are going to stay home instead of traveling.  It is fun to drive south for the holidays, but Darrin just can’t get the time off.  I actually don’t mind staying home because I’ll be able to watch the Doctor Who Christmas special.  I would hate to have to wait for the next series to come on when it finally repeats.  That has happened every year too so I’m looking forward to finally watching it the day it actually airs.

Santa has already visited us, so we really don’t have much to celebrate anymore.  Darrin bought himself, or should I say Santa bought Darrin a new iPhone 4S with a 2 year contract with Verizon.  And I got some new underwear.  Yes, I asked for underwear lol.  That was actually what I really wanted so I’m happy.  I was down to 3 holey pair, so I was long overdue.  I would have asked for an iPod Touch 4th gen 16GB, but Santa has already spent too much money on one apple product, so I can wait to see if I get any money from book sales for that, or an iPad2 lol.

Speaking of my book, I had hoped I would have been finished with it by the day after Christmas but I am still in editing.  I finished my final edit, but then I went back to the beginning and have found more issues.  I am working on my final final edit so hopefully it will be finished by January 1st 2012.  I can’t promise anything because when I finish with my final final edit, I will of course have to read the whole book again to make absolutely sure it’s perfect before I publish it.  I don’t want even one word out of place or misspelled lol.

In case you are wondering, yes I have been working on this book for the last 6 months.  I actually started in 1989… started over in 1997… started over summer 2010 and only wrote 3 or 4 chapters.  Started over again in May or June 2011 where I rewrote the chapters that I wrote in 2010 and wrote the rest of the book.  It only took 2 months to write it, but it has taken me 4 months to edit it.  Writing is hard ya’ll!