I watched the first 3 seasons of Sliders on Hulu because I missed it when it originally aired.  Unfortunately they didn’t have seasons 4 and 5.  I found it on Netflix, but I hate watching tv shows on my computer.  I had my computer plugged into the TV when I watched Caprica, but that was a pain because it was always going out of sync.  I got a new Sony Blu-Ray player for my birthday so I took that as the perfect opportunity to finally watch Sliders because the Blu-Ray player has internet channels like Netflix and Hulu Plus among others.

I was sad when the professor died in the 3rd season and I wasn’t sure if I would like the new girl whose planet blew up and she was forced to go with the sliders, but I found that I fell in love with her in season 4.  I was really sad that Wade wasn’t in season 4, but I was thrilled that Charlie O’Connell, Jerry O’Connell’s real life brother joined the cast as his brother Colin Mallory.  I loved the 4th season of Sliders.  I have to admit that I spent a LOT of time looking at Charlie, he is hot LOL.

I have already seen the first few episodes of the 5th and final season of Sliders and I think it’s ok, but I’m kinda miffed that Jerry and Charlie O’Connell aren’t in it anymore.  I thought that it was lame that they replaced Quinn with his alternate universe version who doesn’t look a thing like him, like he’s a Quinn’s fraternal twin LOL.

Tembi Locke (from Eureka) is in season 5 as a scientist named Dr. Diana Davis.  I guess since our new Quinn isn’t a genius, they needed to add another genius to the cast to do the things this new Quinn cannot do.  And they aren’t calling him Q-ball or even Quinn, they are calling him Mallory.

I almost didn’t watch season 5 because the only person that is left in the show is Rembrandt, but on the other hand, I love that Tembi Locke is in it so I think I will keep watching it until the end.

What is the plot of this new cast anyway?  I mean, the plot was originally to find their way back to their own universe, but now Rembrandt is the only one who wants to find his own, but they were already there and it has been taken over by an alien species known as the Kromags.  His world is now ruined so he has no reason to go back, except for wanting to be with his family of course.  Maggie has no home so wherever she goes is home.  Diana and Mallory, well I don’t know if they even want to go back to their home.  So what is the purpose now besides trying to stop the Kromags?

Anyway, I guess I will find out when I finish the 5th season.  I think it’s still a good show despite the fact that the original cast is all gone and it was replaced with 3 new people.  I’m glad at least one of them is still original lol.

By the way, can I just say how Maggie looks almost exactly like the woman who plays the evil queen in ABC’s Once Upon A Time?  I already checked, they aren’t the same person, but they could be twins.  Hmmmm, twins from a different universe perhaps?

Owning property is a very big responsibility, especially if you have a huge family, you are going to need a will to make sure that everyone gets what you want them to have.  Even if you are young because you never know when your time will come.  I know it’s a grim thought, but it has always been something that I have had to worry about because I have some family members who would clear my room out in 2 minutes like a pack of wolves and leave nothing but bones for Darrin despite the fact that our bridges have all burned to the ground.  Luckily I don’t own property.

If you are in Barrie and Toronto Canada, Stewart Esten Law Firm is the way to go.  They have experienced estate lawyers who are ready to help you create your will, power of attorney and the administration of your estate or the estate of a loved one who has recently passed.

I am not too familiar with estate law, it is way too complicated for me.  I know about trusts because Chips mother had created a trust before she passed away.  She had to make someone the executor of the trust to take care of all of the bills for all of the houses that she owned, and any money that was made on the sale of any property went into the trust.  The rent for the houses goes into the trust and that pays for the mortgage and any upkeep of the houses.  I’m not sure if an estate will is the same, but I’m pretty sure it is.

At any rate, if you own property and you have family members who you know are going to fight over every little thing, be sure to have a will so you know everyone is getting what you want them to have.

Funny story, I think my mother was a bit psychic because when I was 19 she told me that I need to make out a will so that when the day comes that I have burned all of my bridges with my sisters, I can will them $1 so they cannot contest the will.  Isn’t that funny that she would tell me that?

I have been having a bit of fun in EverQuest over the last couple of days.  I haven’t really had much time to play since we have been so busy trying to install the new floor, so when I do get to play, I don’t really know what to do.

When I got in the game yesterday, I decided to see how many Station Credits I had (you get a specific amount of credits every month as a subscriber) so I could buy something fun and I found a few items.  First thing I bought was an illusion for myself (picture above) which is of a burning Nekhon.  As you can see, it’s a dragon like creature that walks on legs like a minotaur (or bull) but has flaming wings.  I get two icons in my spell icons box, one is the illusion and the other is the added benefits of the illusion which burns creatures that strike me and levitation.  It looks awesome, especially when I’m fighting, but he looks so funny when he runs.

I also bought a couple of other things… 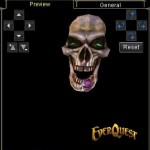 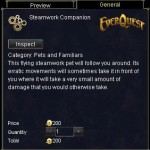 The first thing was a Nightmare Skull.  That is a pet illusion; you cast it and your pet turns into that.  The only problem was I forgot that I don’t have a pet, I have a familiar, he isn’t considered a pet.  A pet fights the monsters (mobs) for and/or with you, but your familiar only gives you added benefits like clarity.  So, I wasted 200 station credits.  I would be better off buying that for my necromancer EvilXanapus.

I still wanted a new pet/familiar so I found the Steamwork Companion.  He is a little floating robot which gives me levitation and when I am fighting a mob, he steps in front of me and takes some of the damage.  He stays around for 5 hours which is the same as my regular familiar, so he keeps me floating for a long time.  I mean, he’s not that useful, but any damage mitigation is good so I don’t mind.  Plus he’s cute to have follow me lol.

The last thing I bought was Shrooms of Sight.  It’s basically drugs lol.  They have had alcohol in the game forever, but this is different.  Although it’s not what I thought it would be.  I thought that I would be seeing some strange stuff going on that nobody else could see, but all it does is it turns the screen different colors for a minute or so.  It’s really actually kinda lame lol.  It was cheap so no harm done. 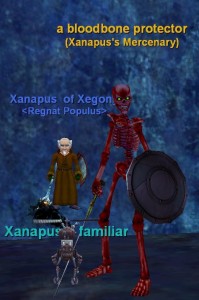 So here is me in my regular gnome form with my Steamwork companion and my bloodbone protector mercenary.  He fights all of my battles for me.  He isn’t considered a pet because he is a paid mercenary and he goes in the group.  I would love it if he were a floating skull, but I like him as a bloodbone skeleton, especially when I am using the Nekhon illusion.

This picture was taken in the Western Wastes on the Velious continent at the zone to Siren’s Grotto.  I have been going there to fight for Deepwater Ink for alchemy with my Vah Shir Shaman character named Painen Dabum.

As a level 77 wizard I don’t get any exp killing the mobs there, but it’s quick money and I get the alchemy ingredients I need in a timely manner.  And believe me, there is a lot of money to be made there.  I get tons of gems that sell for a couple hundred plat each.  I can fight in there for a couple of hours and make 1000 – 2000 platinum.  I go there for the alchemy ingredients, not the money, but it helps, especially since I have to pay the mercenary 35p every 15 minutes and the potions I make in alchemy cost money to make.  I am making the potions to sell back to the merchants and to get my alchemy skill up.

Although, I would do better with the higher level alchemy potions, but those ingredients are foraged and it’s boring to sit in the Dreadlands with my druid for hours upon hours twiddling my thumbs waiting for the forage button to let me forage more.

But I digress, I am having a lot of fun playing the game again, even though I am playing by myself lol.  I can’t wait to get the burning Nekhon and the floating skull for my necromancer, I think that would be awesome to look at.  It won’t be any time soon because they don’t give me very many station credits every month.  If I really wanted those things, I’ll have to pay them real money for more credits and I just don’t want to spend any more money than I already give them every month.