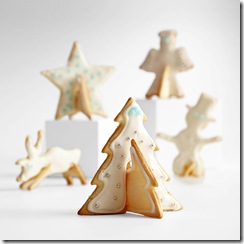 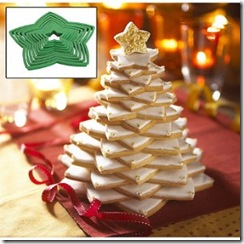 Can you believe that it’s almost Christmas already?  I can’t because it seems like just yesterday I was sweating my Christmas ornaments off in the summer heat.

Even though I know I shouldn’t eat them because of how bad they are for you, I just love baking cookies.  I bought the 3D cookie cutters (left image) I want to say in 2005 or 2006 from Publishers Clearing House.  Yuk it up, I made 4 payments lol.  I wanted to make them with the cookie recipe the cookie cutters came with, but Darrin told me it was too much work and that I should just go ahead and buy a roll of sugar cookie dough already made from the grocery store, which I did and it was the biggest mistake because the dough rose too much and the pieces didn’t fit, so I had to shave it down where the pieces were supposed to slide together.  I also bought the powdered sugar and food coloring so I could decorate them in many different colors which was also a mistake because it looked like a pre-schooler decorated them.

This year I bought the 3D Tree cookie cutters (right image) from AVON.  I don’t know why but the set didn’t come with a cookie dough recipe, but I did buy Halloween cookie cutters which did, and I made them and they were very good so I will be using that for both sets this year.

Instead of decorating them with many colors, I will do them both just as they are in the image with white frosting made with the powdered sugar.  They have sprinkles in the holiday aisle at the grocery store with shapes which will add more color to the trees and the star and it will give eyes to the reindeer, angel and the snowman.

When I made the 3D cookie cutters, I gave them to family and I was very disappointed that they were still there a year later, and I believe the next year after that.  They said they didn’t eat them because they were too nice, but it’s insulting to give someone cookies that I worked hard on making just to see that they didn’t even eat them.  If you don’t want to eat it, then give it to a child, trust me, they will eat it lol.  If not, just throw it away.

I can’t wait to make these cookies again this year.  I was hoping to make the tree and decorate it with rainbow colors for the PFLAG Christmas potluck, but I wasn’t sure how I would do that.  Well, I think I might know how, instead of doing all the layers white, I could paint them in rainbow colors.  There are enough that I could paint 3 stars in red, 3 stars in orange… etc.  Who knows, I still have awhile, but whatever I do I will definitely post pictures when it happens.