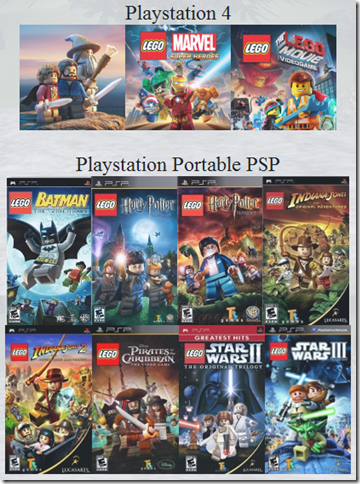 When I was a child, I LOVED playing with Lego’s. I mean, sure I loved playing with a lot of my toys like Light Bright and my Construction Set, but Lego’s were what I really had fun with. I would literally be in my bedroom playing with them for hours. You know when you don’t hear a child, something’s up, they are doing something bad, but I wasn’t because I was building houses or robots or whatever.

I don’t recall when it happened, but my mother took away some of my toys to make room for newer, more mature toys, and the Lego bricks all disappeared. Sad but true

I have loved video games since I was 12. When I was 37 and bought my PSP, I found out they had Lego games. I was sure they were too juvenile for my age, then again I was a grown ass man age 37 playing video games, so I’m pretty sure I was the juvenile one lol. I actually loved it more than words can say. That first game by the way was Lego Star Wars II. I bought more as they released them.

This Christmas I got a PlayStation 4 and naturally I wanted to buy some Lego games. I was a bit disappointed that they were $60 though. Lego The Hobbit was $50, and I had $10 credit with my new PlayStation and I had $20 in PayPal, so all I needed was $20 which came out of my bank account. I just had to buy it. Lego Marvel Super Heroes was only $23.89 on Amazon and The Lego Movie Videogame was only $24 during a recent flash sale in the PlayStation store.

There is a huge difference in the games design from the PSP and the PS4 Lego games. For example, in the PSP Lego games, you find yourself in a specific building, or in the Star Wars case a ship and the Harry Potter games you are at the school. The PS4 Lego games are different in the sense that when you finish your level, you are back on the trail onto the next spot. I’ve played the Lego Hobbit game all the way to the end where you see the credits, as if it were the ending to a movie, but I’m only 23% into the game. I’ve finished story mode, I just haven’t gotten to any of the free play modes. I am not quite sure how to go into free play though. I did figure out how to get back to Hobbiton since they have a spot where you can fly with an eagle to wherever it is on the map that you want to go, but I still don’t know how to get to the free play mode. I have only finished the first level in the other two Lego games.

I really love the Lego games, unfortunately I can’t afford to pay $60 for a game that I may or may not play and/or finish. I say that because I still haven’t finished any of my PSP Lego games. I’m at 98% with the first Lego Star Wars game, and around 95-98% with the first Lego Indiana Jones game. I haven’t finished them because it’s hard lol. Most of the other ones aren’t even close to 60% because I may have gotten bored with them or because I was more interested in something else.

Lego Video games are cool, but I really wanted some actual Lego bricks, so I bought this little Minecraft Lego set. It’s very small and it sits on top of my PlayStation 4 on my desk. I really like how it looks and I would love to buy more sets, the only issue is that they cost a lot of money. This set was only $20 and I was very shocked at how expensive it was, but when I saw how expensive the other sets were, I was like screw that noise, I don’t want them THAT bad lol. I saw many Lego Star Wars sets for $10 each, and those would be cool to buy, except where do I have room for them? No where, that’s where. My bedroom is already bordering on hoarding. I think the Lego video games are the best use of space for me lol.

Update: I finally figured out the PS4 Lego Games. You have to travel via eagle, which I figured that out already, but then you have to go on the map and click on the white bricks and the doors and the people and anything else that is on the map, then have it lead you to that spot. Once you get the white bricks, they disappear from the map. Once you get to a person and buy that person, I know that sounds funny, then that person disappears from the map. Once you get to a door and go into freeplay mode, well, that door doesn’t disappear because you have to have many chances to get in there, even if you’ve gotten everything out of there in story and freeplay mode. I went back to the very first thing in the story, but in freeplay mode and I missed something, so I have to go back. I did manage to get about 4 white bricks while I was back in Hobbiton. When I finished that freeplay, they teleported me back to the end of the game at the mountain where you find Smaug. It just sucks they didn’t add the 3rd movie to the game.

I’m sure it will take me a long time to finish the game. It took me about 6 months to get where I am in the Lego Star Wars II game on my PSP. That’s what I love about these games, they keep you playing for a long time, unlike some games that are so easy that you end up finishing them in no time.