came today. YAY! It took me about an hour to put it together in the kitchen. You would think that it would be difficult to put a big thing like this together when you have a broken leg that is still healing, but I didn’t have too much problem. Well, except for a couple of issues.

Assembling my new tricycle was pretty much a cake walk with the exception of the fenders. The front fender went on without a problem, but the instructions said to install the fender first, then install the front wheel while the tricycle was upside down. Ok, no problem. But when I installed the front wheel I found a problem. The front of the fender was raised 3 inches above the wheel, but the back of the fender which is next to the frame is sitting right on the wheel, which means it would always rub against the wheel. I don’t know what the fix is, so I just turned it around so it’s on backwards, and it works.

The back fenders on the other hand are both installed correctly and they also rub the tires. The box that it came in was really damaged. I honestly don’t know if it was damaged from Amazon or UPS. When the driver dropped it off, he banged on the wood (we have wood paneling outside lol) then he rang the bell and ran to his truck and literally drove away before we could even open the door. Why do they do that? They used to wait for you to come to the door, then have you sign something, now they don’t even wait for you to come to the door. For all I know they could drop it off and someone could steal it before I even get to the door. Not that they could since it was a 71lb box lol. 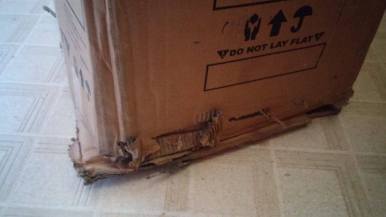 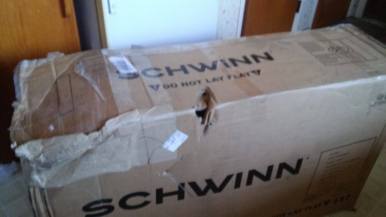 Anyway, getting back to the tricycle lol.

So after I put it together, I went out on a little test ride in front of the house. I got on and tried to use my good leg to get me going, but for some reason I couldn’t. I’m so used to using my right leg, so I used my right leg, which isn’t a very good thing because it took a lot of force to get me going. But it didn’t hurt, so that’s a good thing. It was really difficult to turn right because the street slopes. The middle of the street is a higher elevation than it is at the gutter, so when I tried to turn right, I had a bit of trouble. I wasn’t sure if it was the handlebars that wasn’t aligned with the front wheel, so I adjusted it and I still had problems. I’m sure when I can start walking again I will have all the kinks worked out and turning won’t be that big of an issue.

My partner was freaking out about me getting through the doors because this bike is so wide. It’s got a badonkadonk lol. The back of it was really difficult to get through the door because of the caps on the axle on each side. I got it out of the kitchen and out the front door, although it took some doin’ to get it outside. When I was finished with my test ride I went to put it in our patio and I noticed that I had more of an issue getting it in the patio than I had getting it out of the front door. I honestly don’t know what I’m going to do if getting it in and out of the patio is going to cause problems for me. But I don’t know what else I’m supposed to do. It has to go in our patio, there’s no question. So I guess I’m just going to have to suck it up buttercup and deal with it.

I love the color, and I’m going to have to find a matching nail polish because there are already scratches on the paint from the shipping. It doesn’t bother me much, but it bothered my partner. He wanted me to send it back. Screw that noise! It’s going to get more scratches along the way, so who cares. But, I’d still like to find a matching color just so I can fix it if it gets crazy scratched up.

Riding this tricycle is awkward for me, but perhaps it’s because I’m not used to riding a tricycle. I’m sure it will get easier and I look forward to more practice.