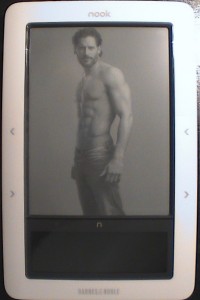 Before I go on a rant, I would just like to say that I love my Nook. I’ve had nothing but fun with it since I got it on Friday night. Yes, I have had some irritations but the more I play with it the more I understand it and love it.

With that said, I just want to say how I am questioning their “10-day battery life” statement. I’ve only had it since Friday night which is when I first charged it. The next day the battery had started going down so I plugged it in again so I am really counting from that moment which would be Saturday afternoon when it was at full capacity which for some odd reason was only 97% when the light went off and it stopped charging.

Note that they said 10 days IF the wi-fi is turned off. The Kindle wi-fi has a 30 day battery with wi-fi turned off and it only uses the battery when you turn the page right? So I think that this is 10 days because every time you have to look up a word it turns the LCD screen on which uses battery so that’s why instead of 30 days it’s only 10 days.

How much time do they estimate per day that you should use the Nook to give you 10 days of battery power? 1 hour per day? 2 hours?

Maybe I’m using it more than they would have estimated that a person would use it and that’s why it’s sucking so much energy from the battery.

I think what’s happening is that every time I don’t understand a word I look it up which turns the LCD on. And before I start reading I usually go into the daily to see what they have in there. I pick up my Nook several times per day and look at stuff in the Nook store. So maybe I am over using it.

I mean it doesn’t really bother me that much that it’s only been 3 days and I’ve already used 75% of the battery because I can certainly plug it in every few days. It’s the principle that they say “10 days” without a charge that gets me because I’m seriously wondering just how long they expect a person would be using this thing.

Look, I’m a reader, I love to read… a lot. I’m gonna be using this thing for hours at a time, maybe 4-6 hours per day. It’s gonna get its use whether I’m reading a book, magazine or newspaper or just browsing the Nook store. So I guess if I over use it like that I’m gonna have to expect to charge it every few days.

I guess I’ll just have to deal with it lol.

Imagine if you will, a scenario where you are living in a country like the United States where you are told you are not allowed to be patriotic because it might upset someone. That is what happened to a Colorado Junior at his high school.

He was caught squealing his tires in the high school parking lot and got into trouble by the security guard who suspended his parking privileges for 2 weeks but then she had the nerve to tell him to take down the 2 American flags he had waving from the back of his pickup truck. She told him that it might upset someone.

What makes this security guard think that being proud of your country would upset people? It makes no sense. I think this security guard needs to re-evaluate her patriotism before she tries to tell someone they cannot be patriotic. In fact, I’d venture to say that she doesn’t deserve to have a job where she is in charge of telling people that they cannot wave the American flag in the United States.

Heck, the school itself waves an American flag on the flagpole, what makes her think that it’s not ok to wave a flag from your vehicle?

I’m sorry, it just upsets me to hear this kind of thing especially with September 11th coming at the end of this week.

For some reason I couldn’t amplify the video in this article so please follow the link below to visit the website that this article comes from to see the video. It takes seeing the video to get the full story, besides the text from the story that is.

Jeremy Stoppel is man enough to admit that he deserved getting a ticket for squealing his tires in the school parking ticket. But he has a problem with the order that came down from school security — no more American Flags. He told KMGH-TV:

“She said I should take my flags down. She said this is a school that focuses on diversity and she doesn’t want anyone to feel uncomfortable,” Stoppel said. “How do you suppose anyone would feel uncomfortable in America with an American flag? That’s where I’m confused.”

Jeremy and his dad told the station they are looking for an apology:

“To me, she’s just threatening him, hoping that she can just bully him so he’ll just take ‘em down and just put his tail between his legs and say, ‘I’m done. Sorry. Sorry. Sorry.’ And that’s just not gonna happen,” said Dan Stoppel, Jeremy’s father.

The principal is promising to look into the matter. Stay tuned.

See this Amp at http://amplify.com/u/9wo9