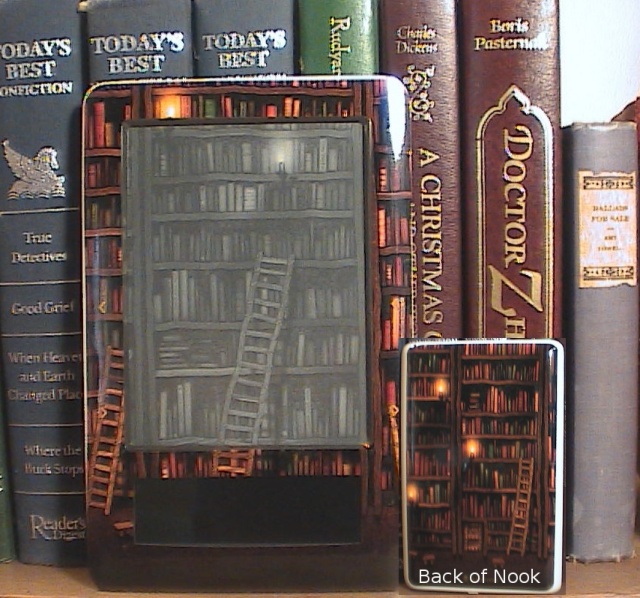 I bought a Skin for my Nook from DecalGirl.com last weekend and it came today.  When I heard the mail drop into the slot earlier I got all excited and ran to the door but the large envelope wasn’t out there so I figured I’d get it tomorrow.  Then the doorbell rang and it was the mail carrier saying she saw it in the back of the truck and drove all the way back over here to deliver it.  I’m so glad she did.

Last night I was getting antsy and went on YouTube to see how easy or difficult putting the skin on a Nook would be and the person who posted a video showed how easy it was, how it’s not sticky at all and it doesn’t stick until you press on it so I had hope that I wouldn’t screw it up.  Well, mine was sticky, so sticky that the backs touched as I was taking it off the sheet it was printed on.  I almost ripped it while trying to take the pieces apart.

Putting it on was really difficult, in fact you can see some white on the sides of the front here and there where there isn’t supposed to be white but I couldn’t help that.  It stretched in some places and there is a crease at the bottom which I’m afraid to fix out of fear that I’m going to stretch it out even more.

The back on the other hand was as easy as apple pie.  Maybe because it was one solid piece or maybe because the back of the Nook is less shiny and more rubbery than the front of the Nook.  I don’t know, I just know it looks so awesome.  I was getting so sick of looking at the beige color of the Nook, I wanted something that was colorful, although this is really dark it still has color in it.  And it has a library which makes it even cooler to me.  I’ve been wanting to buy this skin for my Nook for such a long time and I thought why not, just do it and I did and I’m so happy I did.

The only downside that I see is when I’m holding it I can feel the edges of the skin on the back since it doesn’t go all the way around.  I made a stand to have it sit on so I don’t have to hold it so I can use that when I’m reading at the desk.  I also made a case for it so I will put it in there when I want to hold it.  Either way it’s a win for me.

Ok now I’m off to read more of this book I’m reading before shows come on.  Later!