I bought a brand new back wheel for my bicycle from the local bicycle shop, Snider’s Cyclry, in June.  They didn’t give me the rubber that covers the screws inside the wheel and the way I feel is that you shouldn’t even have to ask for it.  They should just put them in the brand new wheels when they take them out of the box so they don’t forget to install them when they sell them.

I assumed it had one when I bought it so I didn’t ask for it and came home and installed it without the rubber.  I noticed it didn’t have it and I didn’t feel like asking to be taken back there so I just covered it with black electrical tape.  I went 2 months with the tape on there with no issue at all.  Not one flat tire the whole time so I’m very confused as to why I can’t keep air in it anymore.

A week or so ago I got a flat tire so I took it out and the hole was right next to the valve.  I checked the black tape and it wasn’t covering the screw so I could see that the tape wasn’t the perfect solution.  I repaired the tube and put the tape back on the screw and filled it with air but I think because the repair was so close to the valve it just wasn’t going to work.

Luckily I had a spare tube so I took the wheel off and put the new tube on it.  Later that night I heard my bicycle fall down in the patio.  What the…  I took the wheel off and pull the tube out and it has a hole in the same exact spot on this brand spanking new tube.  Not wanting to waste the tube I decide that I really want to repair it and naturally the repair won’t work.

I haven’t been able to ride my bike at all in over a week because I didn’t have the money for a new tube.  Darrin went to Target and bought me a new tube but he bought the expensive Schwinn self sealing tube. 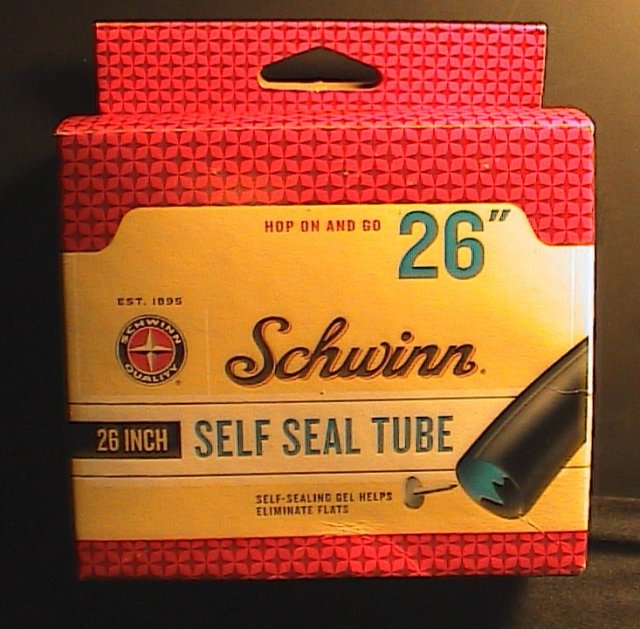 Since I knew the black tape wasn’t helping, I thought that I should try to make my own rubber screw cover by cutting up a tube that I had repaired way too many times.  It’s a little thicker than the rubbers that they normally use to cover the screws but it’s all I have to work with.  It was too long so I had to cut it and patch it.  The patch didn’t stay on so I decided to just hot glue it to the wheel lol.  I didn’t use too much glue so it shouldn’t make it too thick and if it doesn’t work out I can always remove it.  The glue peels right off very easily.

This morning I get on my bicycle to run down to the store and buy some milk for my breakfast and the wheel is flat.  I just installed it this weekend and rode it to the store once or twice on Saturday and it was fine all day Sunday so I don’t understand why it’s flat all of a sudden.

I took the wheel off the bike and removed the tire which was a huge pain in the ass because the tube still had a lot of air in it.  I finally got the tire off and put the tube in a bucket of water to find the hole.  When you see bubbles coming up then you know where your hole is.  No bubbles at all.

I put the tube and tire back on, put the wheel on the bike and fill it with air and it was fine.  I have even been checking it every couple of hours the whole day by squeezing the tire to make sure it was hard and it’s been fine.  All I kept thinking was thank goodness, I don’t think I’ll have any more issues with it.

Tonight I was in the kitchen getting a glass of water and I hear a banging sound in the patio.  I go out there and my bicycle is on the ground.  It fell because the tire went flat.  I don’t understand.  I haven’t even been on the bicycle since I filled it with air.  The tire has no stickers in it so I know that isn’t the problem.

So my next thought is that maybe these expensive self sealing tubes have a glitch in the valve that when the blue or green gel is inside the valve it keeps it open a little so air can escape.

This whole thing with this back tire is really frustrating the hell out of me because I’m not getting any exercise because every time I go out there I have a flat tire.  There is nothing more infuriating than not being able to ride my bike.

Ok well, tomorrow I will clean the valve out and fill it with more air and see what happens.  I hope that works.  If it doesn’t then I’ll have to go out and buy some of the cheap tubes that don’t self seal.  At least the cheapo tubes last a heck of a lot longer than the expensive ones.

One thought on “My Frustrating Bicycle”