This morning our cat Shanaynay passed away.  I don’t know the exact time but it was between 6:30am and 8am.  On Memorial Day no less.  So every Memorial Day I will remember her.  She was born some time in October 1994.  I couldn’t narrow down the exact date so I gave her October 31st for her birthday.  She passed away at age 14 1/2.

She was the best kitty anyone could ever hope for.  The day we got her I was actually in bed sleeping and I woke up and saw this little tiny kitten sitting there on the bed and the first thing that I said was awwwww.  Here are some pictures that we took of her the first month we had her.  Click the small thumbnails to open them up full size. 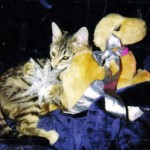 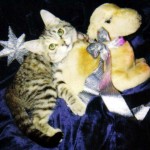 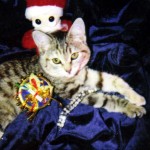 When she was around 6 months old she started her howling thing because she was going into heat for the first time so we had to have her fixed.  It was so funny to hear her howl but that was the first and last time she had to go through that for the rest of her life.

Some of the memories I have of her are from when I would change the sheets on the bed, she would jump up and she would do her little dance where she would pounce sideways with her ears back and her head cocked to the side.  She also did not like her mirror reflection and she would do the same thing but to the mirror.

There was another thing that she used to do where I’d like have her face in my hand and she would kick and scratch my arm with her back feet.  It didn’t hurt as much though but she loved to play.

Over the years she calmed down and stopped wanting to play and just became a very calm kitty.  She didn’t like to have another animal in the house besides herself so we could never have any more cats or even a dog.  Then one day Darrin found a little kitten inside of a box in the middle of the street.  We took care of her and gradually let the 2 of them see each other until they were living peacefully in the same house. 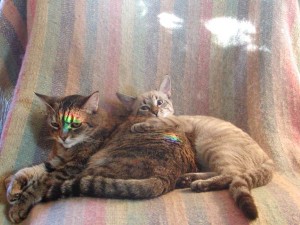 This picture was actually forced upon her, she did not like that at all lol.  I had to take the picture as fast as I possibly could.  That other kitty we never did name her but the Vet named her Baby when she passed away.

Then we got Flower last year, our Toy Chihuahua.  Shanaynay didn’t care.  The dog was a little too rambunctious for her though and she would scratch Flower when she got too playful.

Shanaynay mostly lived inside of our indoor patio.  It gave her the feeling of being outdoors while keeping her inside so she was happy.

She was diagnosed with Diabetes 2 1/2 years ago and we were told that she wouldn’t live very long if we didn’t give her insulin shots but they wanted so much money for the blood tests and then we’d have to pay for the insulin.  I think the dollar amount was like $600 the vet said for the tests.  I was ready to have her put to sleep then but Darrin said no, let’s give her a chance to die on her own.

I ended up changing her diet and instead of giving her the dry food which I believe was the Whiskas and the Friskies, I started giving her the canned Friskies and she did a 180.  She was walking on the back of her legs instead of her feet and when I switched her food she started walking normal again.  She didn’t stop drinking like a sailor and peeing a lot though but at least her legs were fine.

But I end this by saying that she was my favorite pet in the whole world and there is no other person or animal who could ever take her place.  I love you Shanaynay.  Take care of yourself wherever you are.

Edit:  Thanks to my friend Alyce for buying me the wood burning kit I have the tools to make a little grave stone (or grave wood).  Here is what it’s going to look like.