Last week I bought this product for my bicycle from nashbar.com for carrying my groceries.  I got the rack for my birthday from Chips cousin and her girlfriend so all I needed was the bag.

The bag I got is called a Townie Basket and it’s small enough to carry a bag of groceries so I don’t have to keep wrapping the bags around my handlebars.  The more specific grocery I wanted to use this for was for the 2 gallons of milk I always buy because it’s cheaper to buy 2 gallons than 1 at $3.69.

So I got the bag today and put it on immediately which only took maybe a minute to figure out how it goes on.  I went to Albertson’s right away and got my 2 gallons of milk along with some other things that I needed which I ended up having to carry in my grocery bag on the handlebars… I’m gonna need another one for the other side lol.

The only problem is that with 2 heavy gallons of milk it was sagging outward.  I was petrified that they would fall out as soon as I hit a bump in the road or a pot hole, not paying attention to the road and watching the milk instead might make me accidentally hit a pot hole or a CAR lol.

Well, here are the pictures of the bag.  The first one is of the bag folded up on the rack, the 2nd one is the bag open and the 3rd one is of it with its handy dandy rain coat or as I like to call it, it’s shower cap. 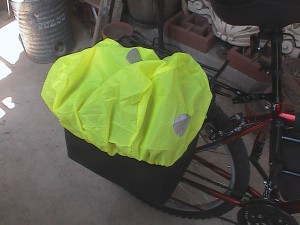 Ok, now to fix the problem with this bag sagging outward I had to think about how I was going to do this.  I remembered the metal with the holes I used to make it so the rack was secure on the bike so I grabbed the roll of that stuff and held it up then bent the top of it over then I held it on the clamp in the tool shed and cut off a piece, then I cut a 2nd piece.  Then I went back over to the patio table and started drilling holes in the hard plastic in the bag so I could screw these things in place and then I put it on the bike rack.  Viola, it doesn’t sag anymore so I don’t have to worry about anything falling out lol.  Well, for now anyway.

It’s a really dark picture but you can see that it’s not black, it’s the silver or gray thing on the right.  Not only does it stay on the rack but because I used the pliers to curl it over the rack bar I know nobody will be able to steal it lol.  It’s too much trouble to be able to steal now.  I mean because it’s only on with bungee at the bottom in the 2nd rack hole then with the 2 metal pieces (the black one on the left) so it’s very easy to steal but not anymore.

Edit: While I was watching Stargate SG-1 today I was thinking of how I could make this even more secure to the rack, not so that it doesn’t make my milk fall out but secure as in security.  How do I keep people from trying to steal it?  Bracket it to the rack.  See, there are these straps at the bottom that you are supposed to put the rack through, the metal sticks that get screwed to the wheel part of the frame, those are supposed to go through these straps and you would think that those would be velcro so that just in case your rack doesn’t allow you to put them through, then you could just undo them with the velcro.  So I came up with something a little more permanent.

This picture is taken from the inside of the wheel, as you can see the spokes on the right and left side.  I bracketed the bag to the rack so it would never be easy to separate.  Well, I mean it would if I was trying to but a thief couldn’t easily do it and the guards at the grocery store know me and my bike so they would know if someone was trying to take something off my bike anyway.  But this would definitely slow them down lol.

And to top it all off, I put an eye hook in the outside of the bag, you can see in the first 2 pictures, there is a little silver rectangle, that is the logo of the company I bought it from.  Well, I screwed the eye hook just below that logo so that I could easily attach a bungee cord to it then the other end of the bungee could attach to the other side of the rack.  This way everything will stay inside the bag and not fall out.  The neon yellow shower cap will be able to protect it with the bungee cord in place so that isn’t an issue.