I don’t know what it is about summer but all of a sudden there are fly’s all over the kitchen window above the sink.  It’s like that every year at this time.  When I go to take the dog out in the back yard I usually open the back door then we walk to the back gate and I let her out then I go back into the kitchen and close the door.  But even if I’m not opening the door they come in through the front door when we answer the door or when we are coming or going.

So about a week ago I was sitting in my room watching tv and the saying “you catch more fly’s with Honey than you do with Vinegar” came into my head.  I wasn’t thinking about the fly’s so I don’t know where that came from but it was like all of a sudden a light bulb turned on above my head.

I went into the kitchen and we had these honey packets from KFC from awhile ago that we never used, yes I’m the guy who saves ketchup packets and all the other “packets” lol.  Anyway, I put some on a napkin (yes, from Taco Bell lol) and put it on the ledge above the kitchen sink and left it.  Well, after a few days the honey had soaked into the napkin so you couldn’t even tell it had any honey on it, it just looked wet.

I threw the honey napkin away like 2 days ago and cleaned the honey off the tiles.  During the entire time I had that honey sitting there it was like all the fly’s had disappeared from existence.  They were gone.  None of them took the bait and landed on the honey and got stuck but they just disappeared.  That’s why I removed the honey but it’s been 2 days, the fly’s are back in full force.  So, I went to look for more honey packets to put on a little plate but we didn’t have any more, I’d used the last 2 but we did have some syrup.

Yes, I know what you are going to say, ants… well, they didn’t come when the honey was there so hopefully they won’t show up for the syrup lol.  But since I put the syrup out about maybe 10 minutes ago all the fly’s are gone again.  It’s almost as if they were offended by it or something lol.

Oh speaking of fly’s lol have you heard on the news about Obama killing a fly during an interview and then PETA came out against him saying he murdered an innocent fly on TV lol.  OMG hilarious.  They said he should’ve used this thing called Katcha Bug which is a stick with a little pyramid looking dome that you catch the fly in then set it free outside lol.  Ok whatever you say PETA.  I believe that dogs, cats, birds, elephants, lions, tigers and bears oh my all have souls but I mean come on, who freakin cares about a house fly whose life cycle is only 15-25 days anyway.  Who cares, KILL EM! 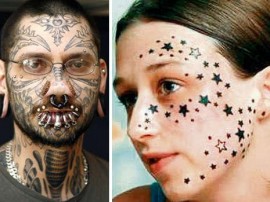 This guy named Rouslan Toumaniantz tattooed 56 stars on this girls face after she asked for stars to be tattooed to her face.  Here is a quote:

“Toumaniantz claimed that Vlaeminck agreed to have the tattoos done: “Kimberley agreed to everything, she was very happy with my work. I have a witness who saw everything.”

Now she says that she is ugly, disfigured and can’t even go out anymore, not even to work.

By the way, she fell asleep during this procedure.  She fell asleep.  How the heck do you fall asleep while someone is putting needles on your skin especially on your face?  The only way someone is going to fall asleep and endure this much pain is if you have numbed your pain with some kind of drug or alcohol.  That is why it is illegal to tattoo someone while they are intoxicated because they can’t be responsible for the tattoo they are about to ask for because they might have been influenced to get it and they don’t remember.

Here is another quote:

He said that it was only when Kimberley’s dad saw his daughter that she changed her mind.

But the Franco-Russian body artist has now offered to meet the cost of a laser operation.

Toumaniantz, whose own face is full of piercings and covered in tattoos, said that he has learnt from the incident: “That was the first time that I’ve tattooed a customer’s face. I won’t do it again without written permission.”

The amount of money that she will have to pay to have the stars removed is $13,000 (converted to US dollars – according to fox news) and he has agreed to pay for half of it.  If he has a witness stating that she was happy with it and she asked for it then I don’t see why he should have to pay a dime.  But considering it was on the face and she wasn’t covered like he is with tattoos then he should have had her written consent first.