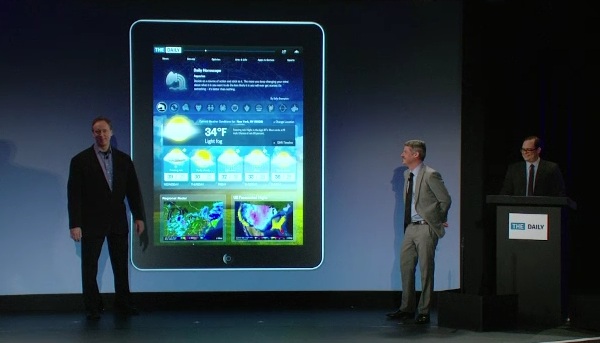 Rupert Murdoch has announced this new app for the iPad that will give you your news every day for only .99 cents a week or $39 per year. That works out to just .14 cents per day. Remember when the newspaper was just .25 cents a day? You just load the app in your iPad and you get everything that you would normally get in your newspaper and then some.

Although, I wonder if it has any of your local news and features like local obituaries, classifieds, comics and things that are happening in your city, not just around the country and the world. If this replaces the newspaper, what will happen to all of those other cool features that came with the newspaper?  What about the coupons?  Will those just end up coming in the mail instead?

Well, besides losing local news, I envy anyone who has an iPad because it’s really cool and well worth the $39 per year price. They have news articles just like you would see in your newspaper but the exception is you also get color pictures on every article and sometimes even video instead of an image.

Here is a quote from VentureBeat.com where you can read the full story at:

“The Daily is not an island,” they said. You’ll be able to share stories on Facebook, Twitter and via email. You’ll also be able to record audio comments. The app features a built-in web browser, and certain pages also include Twitter feeds. There’s also an apps and games section to The Daily, which will link you directly to the iTunes Store.

The Daily will update throughout the day with breaking news as it happens so if you are at work and something is going on, you will know about it if you just so happen to be looking at it at the time.

I am not fortunate enough to own an iPad so this will be something that I will dream about for a very long time, at least long enough for the iPad to go down in price anyway. It looks like something that Darrin would find very useful where he can save tons of money and waste less paper since he loves to read the newspaper every day. Maybe he can charge an iPad for himself so he can get the Daily. It would be way easier than a new computer which he needs desperately anyway. Also he pays the same price per month that the iPad Daily charges per year so that’s something to think about.

If you have an iPad, let me know how the Daily looks. You get 2 weeks free thanks to Verizon so you have plenty of time to test it out.