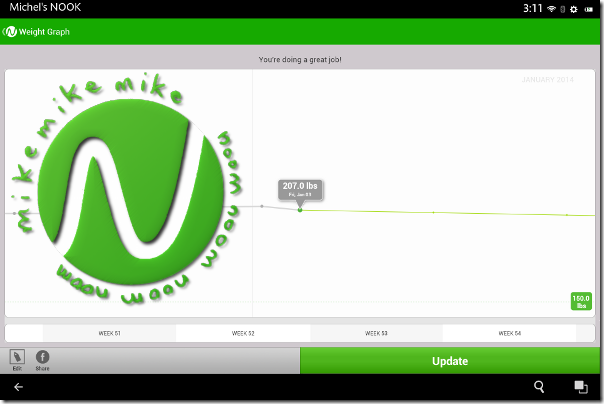 Today was my first official weigh in for 2014.  When I decided to start my diet up again as my new year’s resolution for 2014, I was 213lbs and I wanted to drop a few pounds before officially starting, so I did and now I am down to 207lbs.  See?  I’m serious about this!

My goal last year was just to get down to 200lbs and I did that by my birthday, but I ended up going down to 193lbs which brought my weight loss to 70lbs.  This time I want to get down to 150lbs which means if my official weigh in is 207lbs, then I have 57lbs to lose.  I’m not positive 150lbs is the right weight for me since people insist that it’s not realistic because that is way too thin for me, but I’m 5’7” and the ideal weight for my height is 150lbs, and that was what I used to weigh, and I could still pinch an inch, so I wasn’t skinny by any means.  Although, I have built up a lot of muscle since I weighed 150lbs, so perhaps 150lbs would be too thin.  I don’t know so I will decide when to stop when I get to whatever weight that proves to be too thin.

So the image you see above is my weigh in screenshot from the Noom app on my Nook HD+.  I will take screenshots every Friday when I weigh in and I will post them on my Noom page.  According to the weight graph, I should be at 150lbs by September 28, 2014.  Last year it told me that I would be at my goal by September (or was it November?  I can’t recall) and I was at my goal by June.  Perhaps I will be at my new goal by June again.  That would be awesome because that would make the perfect birthday present to myself.

I will be using the waist graph in the Noom app, but I won’t be doing screenshots of it because I think that’s overkill.  I mean, most people probably don’t give two shits about my weekly weigh in, so I’m sure the waist graph doesn’t make any difference lol.  I barely care about it, but I use the waist graph because it would be neat to know how fat I was in inches from January 2013 when I weighed 263lbs compared to what my inches will be when I get down to 150lbs (hopefully in June).

Anyway, I don’t think I will be writing a blog post every weigh-in day, because I’m sure that’s too boring for people.  Instead I will just upload the screenshot on my Noom page.  I may blog here and there about this and that.  So… until then.