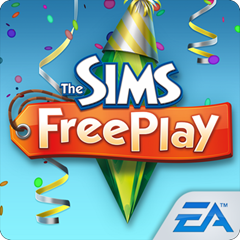 The Sims FreePlay has finally given us an update and not everyone is happy about it. Well, I should say they aren’t happy because EA still has not addressed some of the issues that some of us are having with the game.

There are really only two issues that I am having, like not being able to log in to Facebook in the game which would allow me to access the party boat to claim daily prizes based on how many Facebook friends I have who also play the game. It also allows me to visit those friend’s neighborhoods and interact with their Sims characters. They have tasks that you have to perform to earn a special currency called SP’s to spend on specific items in the store. If I cannot earn that currency then I will not be able to buy those items.

The other issue that I am having is that I cannot play the game on my new Nook HD+ that I got for Christmas. I have been playing this game on my Android phone since last year and I’m perfectly okay with playing it on there because that is mainly the only reason I even use my phone anymore. Ever since I got my Nook, I’ve uninstalled most of the apps that I used to use on a daily basis because they were causing The Sims FreePlay to constantly crash. Since I can use those apps on my new Nook, I don’t need them on my phone anymore.

Some people are reporting problems that they are having that I don’t seem to be having. They are also really irate that EA has not addressed their complaints.  Here are just 2 comments. I blurred out their names for their own protection.  The first one is negative, the 2nd one, well, if you can understand what that person is saying then you decide lol.  That person is having issues that I am not having. 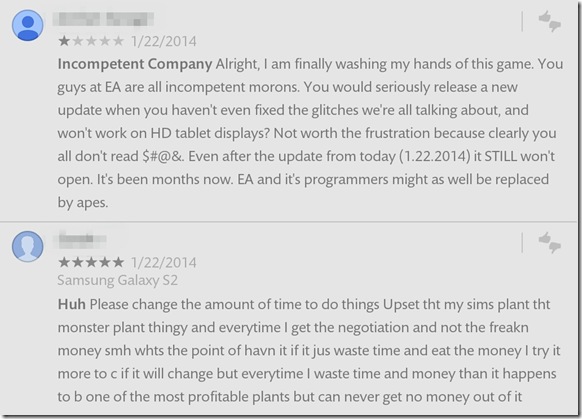 You know, I am just as miffed as the next person, but let us all have a little perspective here. This is a free game. You don’t pay for it, you get to play it for as long as you want for free. There are premium items you can buy with real life money, but you don’t have to buy them if you don’t want to. Be lucky they are giving us all of these updates because their other game The Sims 3 which is also available for your Android device will cost you $6.99 and from what I have read in the comments there, that game doesn’t have nearly as many cool features and items as the FreePlay game has.

Also, you should be so lucky to have your Android phone or tablet because there are many people in this world who don’t have such luxuries. There are children who are being abused by their parents, some even murdered. There are entire families who are starving and sleeping in the streets because they aren’t as lucky as you. There are people in this world who are being molested, raped and murdered.

There are teenagers who are kicked out of the house and end up living on the streets for years simply because they came out of the closet to their parents. There are gay kids being targeted, beat up, some even raped and then murdered in Russia because Vladimir Putin gave them the okay by making being gay illegal. There are gay people living in Uganda who are being murdered or raped, or both. And finally, there are people being stoned to death in the Arab countries for the same reason, because they are gay. So chill out, it’s just a silly little game. Count your lucky stars that you even have the money to play the game on your expensive little toy.

Someone told me to just buy a Kindle. Um… I have a Nook. I can’t just go out and say “hey take my Nook and give me a Kindle.” It doesn’t work that way. My Nook is a Nook HD+ with 32 GB which only cost $150. The Kindle Fire equivalent is $444 (see below). So yeah, I will not be buying a new Kindle just so I can play The Sims FreePlay. Even if I did, I still have the Facebook issue. If I can’t back up my game, then what point is getting a Kindle Fire to play it on?

One person even said to just go out and buy the cheap Kindle Fire. Again, even at the low price of $139, I still have the Facebook issue to deal with. Besides, why do these people think I have money lying around that I can just go out and buy all these new things? I just cancelled HBO and Showtime because I needed that extra $30 a month. How am I supposed to go out and buy a second tablet that I will only use to play The Sims with? I put $20 into savings and had to take it back out just to buy groceries. Come on, think it through people.

At any rate, I will continue to wait and hope that EA will fix these issues and I will continue not complaining because there is more to life than just a silly little game. I will continue playing it on my phone and be happy that I even have that luxury. How happy you ask? This happy… 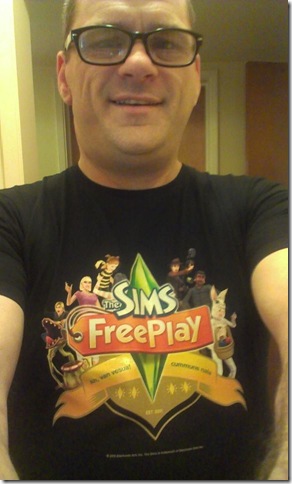