I get bored easily, real easily.  When I find an interest in something it’s all I can think of, talk of, even dream of.  But as with everything I get bored with it after awhile.

I don’t know, I still visit those websites I’m bored with hoping to find something that will spark an interest again, except for EverQuest because that’s not free to explore.  They charge you $15 a month so it’s not good to be bored with something that you have to pay to play.

I found this a couple of years ago in the kitchen with a lot of other recipes and I just couldn’t resist scanning it lol.  I’m not sure if Opal ever made this but just reading the recipe will make anyone cringe and laugh at the same time.  I don’t know how old this is but I’m certainly glad I didn’t live during the time that it was acceptable to eat pigeons on toast with gravy. 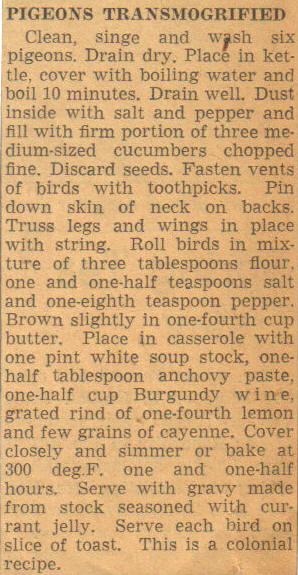 I don’t know what’s going on with me lately but it seems that since I got that new bicycle seat I’ve had nothing but back problems.  It could be that I still don’t have it adjusted right, I don’t know for sure.  I’m sitting back in my desk chair with the vibrate turned on the upper back selection and it does help some.  Sometimes I go sit in the shiatsu massage chair and that just hurts.  I have to sit funny for it to even get to my shoulders.

What happened is a few mornings ago I wasn’t wearing my bipap machine mask because sometimes I can’t breathe with it on so I have to go without for 1 night.  So when I sleep without it I sleep on my stomach and I sleep so weird that it puts a crick in my neck.  So I can’t put all the blame on this new seat but it doesn’t help my back either.

Yesterday I went on my morning bike ride despite the bad neck/shoulder pain but this morning I decided I was in too much pain to go out so I stayed home.

I’m really thinking about going to the chiropractor again because I get massages 3 days a week and they make me use their gym which helps with my weight loss lol.  The last time I went there I think I lost 10lbs in 1 month from using their gym doing the machine exercises as well as the ball exercises.  Maybe that will help me out some then I can learn what exercises I can do at home on my home gym so I will start using that again.

The only issue right now is that I’m broke.  I mean totally broke.  I have $1.75 available in the bank lol.  So I can’t take the bus there and they moved to across the street from the DMV which is a very long bus ride.  I wouldn’t want to take my bike because well, I’m going there because of my bike and I don’t have the proper locks for my bike yet until I get money.  So I’m kind of stuck until I get money.

I hope the pain will go away soon because I don’t have any pain pills or the money for them.  I do have a couple ibuprofens still for my carpel tunnel syndrome and I’m seeing that doctor on Friday so hopefully he will renew that for me.

I just emailed Walnut Hollow with this query but I wanted to post it here as well.

So while I await their response I’m going to save this post as a draft so I don’t have to edit my post.

I am still waiting for their response but while I was waiting I decided to try my own little experiment.  I tried looking for a wire brush, it looks like a tooth brush but it’s wire instead of the normal plastic bristles your tooth brush has.  I wasn’t so lucky but I did find something that is a bit longer than the average tooth brush with longer bristles and is meant for use in the kitchen.  So I grabbed that and also a can of WD-40 meant to keep my bicycle lubed up at all times.

I sprayed some of that on 2 of my points and it soaked the In ‘N Out Burger napkins on my desk so the bottom of my desk is now an oily mess.  I proceeded to scrub the shit out of the points with the brush and even though I could see some blackness going onto the bristles, the threads didn’t change.

I then squirted some WD-40 into the chamber where you screw the points, not too much, I flipped it over and tapped it on the napkin so in case I put too much in there then it would drip out.  I then tried screwing a point on and unscrewing, you know, to grease the threads and it seems to have helped a little but not too much.  Maybe it just needs that to be done several times to get that shit out of the threads on the inside and on the points.

I believe that the ‘black’ on the Points and threads is due to a reaction when the metals get hot from the tool. To remove this, you can use fine grade sandpaper. As for any difficulty you have changing the Points using pliers, try using powdered graphite (found at most hardware stores) to help with changing Points on the tool. Powdered graphite is mostly used in locks to make keys slide in and out easier – works on our hot tool threads also.