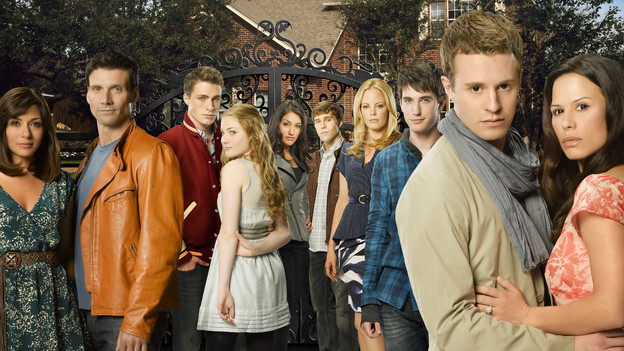 Tonight was the 2 hour season finale of The Gates on ABC.

Wow, all I can say is what a shocker. They gave us a huge plot twist right at the very end with a gigantic cliff hanger until next June when hopefully it returns.

You know it’s too bad it was a summer only show because I can certainly see this being a fall to end of spring show with 24 episodes. It was that good of a show.

Let’s see, what all did The Gates have? Vampires, werewolves, sucubus, witch, and whatever that woman at the police station was without a heart. I thought she was a vampire all this time when she admitted to being “special”. I had no idea that her heart was in that box. And now what is the son? Is he a zombie now? Why does he all of a sudden have power and glowing eyes?

You know when Devan said she had to kill him to bring him back, I had a strange feeling that he would not come back right. I kept thinking that he’s gotta come back as a zombie or something. You can’t just bring a dead person back to life and not have a consequence. If I learned anything from Charmed is that every spell comes with a price.

And they were going to move, HA! Now they can’t because they have to keep their “special” son in the Gates to protect him and everyone else in the world. Now they’re stuck forever in the Gates.

You know I’ve been watching this show all summer and I still have trouble with their names. I know these names. Devan the witch, Dylan and Claire the vampires. That’s it lol. I had to go to IMDB to verify that those are those people’s names and it is.

If this were a fall to end of spring show instead of a summer only show I would have all the names memorized by the end of the season instead of only knowing 3 names lol.

Anyway, it was a very good show and I can’t wait for its return, if it does return. I hope it returns, they can’t leave me with this huge cliffhanger and not return next year.