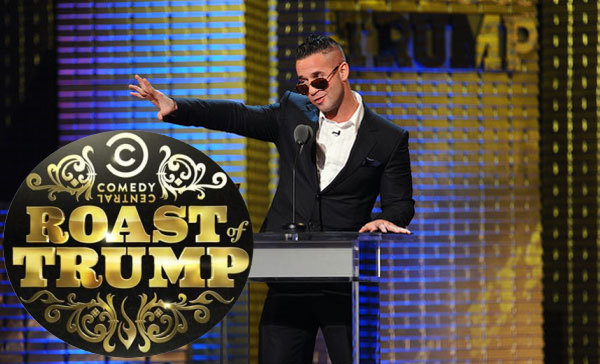 Did anyone catch the roast of Donald Trump last night?  It repeated and I watched it 3 times.  It was just so funny that I couldn’t resist.

There were some very funny people and one not so funny person, the Situation.  I don’t know who wrote his jokes for him, that is if he didn’t write them himself, but assuming he wrote them I think he should have gotten some advice from a professional comedian to help him with his homework.  He didn’t do so good.

A couple of his jokes were funny but the rest was just tragic.  I really started to feel sorry for him.  If that were me I wouldn’t have kept going, I would’ve stopped and said “ok that’s my time, you’ve been great” then slunk back to my chair to sit quietly, or leave to go crawl under a rock for the rest of my life lol.  But he didn’t, he just kept going because he apparently thought he was funny enough to continue despite all the people who were booing him.

His roast of Whitney Cummings was ok, poorly executed but ok but his roast of Anthony Jeselnik is where things went wrong.  He said that he was telling one of Anthony’s jokes to a super model while he was banging her with tons of money on the floor in his mansion.  Who says that?  Then he said he banged 5 or 6 more models.  That’s not even funny.  Was he trying to say that he’s a stud?  Because bragging like that just makes you look even more pathetic.

Well, despite this idiot, the roast was great.  Anthony Jeselnik was a great replacement for our friend Greg Giraldo who passed away last year (rest in peace).

Mike… keep your day job, whatever that might be.

Watch the clips of his suckfest then watch the funny clips on the Comedy Central website.