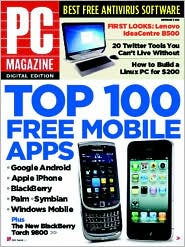 Last night I was thinking about the customer reviews on PCMagazine for Nook and then I was thinking about how they gave the Los Angeles Times such a bad review but I bought an issue at .75¢ to see for myself and it wasn’t as bad as they made it out to be. So I thought, why not try the 14 day trial for PC Magazine. I only get 1 magazine a month and I have 14 days to cancel, I get to sample a free magazine at no cost to me and I don’t have to keep paying.

I could have bought the 1 issue at $2.49 and been out a couple bucks just to check out how it looks or I could get the trial and not lose anything. I am so glad I chose the latter because it is very nicely done. The subscription is only $1.49 per month or per magazine if you will and I get it automatically on the first of every month. Not bad.

I used to get PC World magazine years ago and I had that subscription for I think 10 years but canceled because I couldn’t afford it anymore. Also I had stopped reading it so every issue that came to the house got ignored. I might look at a couple of articles but I didn’t really give much time to it as I used to. They didn’t want to let me go, they fought for me but I had made my mind up, I just couldn’t afford it. Eventually they gave up. If they had PC World for Nook I would gladly start my subscription back up.

I read a few articles this morning of the PC Magazine and although they were good, they weren’t as good as PC World. But it’s the best that I can get for $1.49 per month and since it’s the only PC magazine that is in e-subscription for the Nook then it’s all I got.