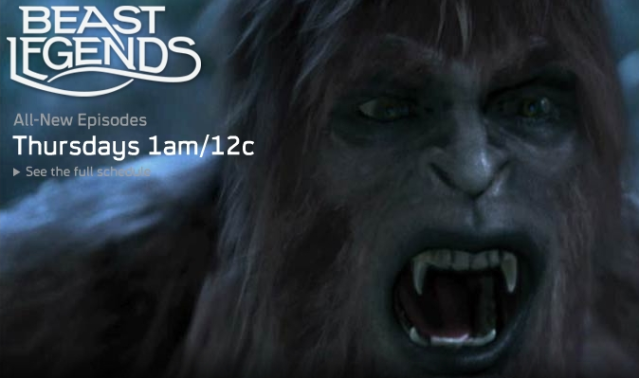 Every Thursday night I turn to the SyFy channel to watch Destination Truth then Beast Legends.  For some odd reason Ghost Hunters is on instead.  Last week Ghost Hunters took Beast Legends time slot as well and I thought something was very strange about that but I didn’t investigate it until tonight.

I went to the Beast Legends page on the SyFy website and the first thing that I noticed was the time change on the image (above) that says 1am.

1am?  Really?  Did it get that bad of a rating that they had to change it to 1am?  I mean sure, the fictional characters they are looking for are far fetched from reality but you could say the same thing about Destination Truth as well.

I wasn’t too impressed with Beast Legends but I did watch it because I thought that the 3D graphics they were creating to build the beasts was kind of cool.  Then they had the little 1 or 2 minute movie at the end which only reminded me of an original SyFy movie lol.

If they are moving it to 1am permanently then I’m not even going to bother watching it anymore.  Yes I’m usually up at that time anyway but I’m not going to watch it if it’s so bad that they had to move it to 1am.  I’m loyal to some shows but not that one.

It’s too bad because the concept of the show was interesting.

When I started writing my autobiography I thought it was going to be a breeze.  I just start typing and let the memories flow through and I would be finished in no time.  WRONG!

Having to remember what happened when so many things happened in a single year is like putting together a puzzle with pieces from 20 puzzles mixed together.  Before writing it out, I have to put down time lines on paper.  There are certain things that happened that are so wrong though.  I know they happened but how did they happen at all?

Example: I remember coming home drunk during my sisters birthday party in a specific apartment that we lived in.  I remember my bedroom was in a partitioned part of the living room and I remember plopping down on my bed drunk.  But, it’s impossible because during that time when my sister had that birthday party I wasn’t living with them anymore, I had been kicked out of the house.

That memory is impossible.  It couldn’t have happened during her birthday so I have to assume that it wasn’t her birthday but maybe a summer party instead.

I have to place the wrong puzzle piece in the wrong slot and hope that nobody notices that it’s wrong.  Does that make it fiction then if I make up what happened or is something I should just leave out entirely?  The problem is, it is an integral part of the story since I was 17 years old when it happened.  I’m trying to make a point about teenage alcohol abuse so I have to leave it in the story line.

Another example: I lived in so many different places in a few years but each memory seems like it took years to create but I now know that it was all during 1988-90.  The problem that I face is trying to figure out where I lived and worked and when.  If I watched tv during those times it would be so much easier to remember when I lived there because I could remember what happened in that season of the show.

I do remember living with my parents when the show Roseanne first aired and watching the series premiere with my mom and a few episodes after that but that was the only show I remember watching that was new.

Now I wish I had watched more tv when I was younger.  I wish I had carried a diary or made a resume.  At least if I had a resume I would know where I worked throughout my life, that way I could remember where I lived and what happened.  But nooo….

Oh well, I’m sure it will all come to me eventually.  It is not going to be easy to write this book and I know it’s going to take some time to do.