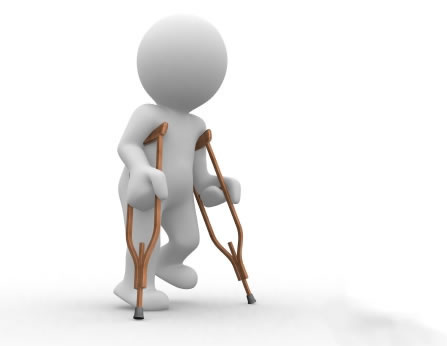 I’ve never had to use crutches in my entire life. I’ve never had a broken leg and whenever I’ve twisted my ankle it has healed within minutes or hours of twisting it so I don’t really have any experience with it.

Now I am forced to use them with my left calf messed up the way it is and I’m a terror.

I just got out of the shower which by the way, I never fully appreciated the fact that our shower has a little built-in seat. We usually just put our shampoo and body wash on that seat and never sit down while in the shower but now that I have to, I’m using it. So I get out of the shower and dry myself off and I had to sit on the toilet to put my bottom garments on (I’m embarrassed to say their names lol) and I get up to put my shirt on, I knock my crutches over which are leaning against the wall next to the bath tub. The crutches knock over a jar filled with marbles into the tub, breaking the jar and getting marbles all over the place.

Mind you, it’s 1:15am when this happens. Fortunately nobody is asleep at this hour but still, if this had been a house full of people, I’d be getting yelled at right about now.

The jar by the way is one of those old jars with a lid that you keep in a bar on a little bar table and it holds liquor. Like I don’t know, Vodka, Gin, Whiskey or something.  Since neither of us drink, those are filled with other things and placed strategically around the house to use as decor.  Why marbles?  And why was it on the edge of the bath tub?  I will never know.

So… I’m totally embarrassed but for some reason I find it hysterical.  Not because I broke something that was probably worth something to someone, I don’t know how much money it would’ve been worth but I’m sure it holds a sentimental value to Darrin and his brother.  I found it funny because I’m normally a klutz but with the crutches it’s worse.

And this is only day 1 of god only knows how many more days I have to deal with this pain.  The E.R. doctor said it’s possible I could be on the crutches for 4-6 weeks, although I told Darrin 6-8 just in case.  I like to overestimate things because you never know.

He has offered to take care of me which is a switch because I’m usually the one that takes care of him even when nothing is wrong with him.  Although, I don’t feel comfortable making him do something for me so even though I know it hurts like hell, I’ll still walk to the kitchen for something and then carry it in my teeth to the room lol.

I should milk the cow for as long as I can though.  I mean, when am I going to ever get the chance to have a personal steward again?  Well, I am a klutz so it is possible that it’s not the last time lol.