I just got this email from Barnes & Noble with some great news about my Nook. Nook 1.5 will be available later next month via wi-fi download or through my computer. I’d personally rather update it with my wi-fi connection rather than having to plug it in to do it but that’s me.

I’m thrilled by everything they will have available because I’m kind of unhappy with certain things.

Ok let’s go down the list shall we? I’m actually ok with the speed of the page turns, they could be a little bit faster but I’m fine with it. It’s actually not that slow but you know, faster is a great idea and I welcome that.

Improved search, I think that means when you type a word it searches that word faster. When I read the Colorado Kid, well, when I finished it rather, I did look up the word Haven and it couldn’t find it but it didn’t take that long to tell me that. I wish that when I’m in the bible I could type in the book, chapter and passage instead of having to scroll through all the chapter numbers until I finally get to the number I want. It would be so much faster if I went to church lol.

Customized library B&N organization. I think that is referring to the B&N library not the My Documents library. That really bites because I have more books that I have from other websites than books that I’ve purchased from Barnes and Noble. I think that they might be saying that all my newspapers will be in “newspapers” and same with magazines and books like you see in the Nook for PC software.

Password protection doesn’t bother me because nobody uses my Nook. Although I would hope that what that means is when I want to buy a book I would have to enter a password. I would hate it if someone got a hold of my Nook then started buying books left and right and put me in the poor house, well, I’m there, the even poorer house. Actually, I think the even poorer house would be the alley behind Winchell’s.

Sync my last page to other devices, that actually doesn’t sound bad if I had other devices. I guess it would be cool if it were sync’d to the Nook for PC because today I could’ve used that option. I was reading and a letter was shown in the book that I could barely read even with the bifocal part of my glasses. I would’ve loaded the Nook for PC program but I didn’t want to have to find the page. Also that program takes forever to load.

I can’t wait for a few of those much-needed upgrades which I have to wait for a MONTH to get. Why couldn’t they tell me when it happens instead of making me stew for a month? Damn them! 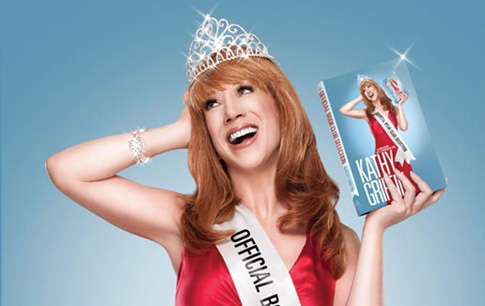 I knew that if I read Kathy Griffin’s autobiography about her life that I would learn a thing or two about how to write an autobiography.

Sure, I could’ve chosen to read a book from someone who was gay bashed by bullies and their own parents (which is the main focus of this book) but well, frankly, I couldn’t find any.  And actually, Kathy’s book is the perfect choice because she was bullied in school and she was almost molested like me.  Although our situations are different, their not too far apart.

In fact, they are pretty much the same except she was only kissed by a 28-year-old when she was 13, I was lead around the house with my balls being held onto tightly when I was 15 before being tongue raped by a 50 something year old ex-prostitute woman who was my mothers best friend.  Great, I just told you the whole story, now what incentive do you have to read my book?

Well, it’s not the only story but at any rate, she has given me more confidence in the way to structure my paragraphs and even adding pictures and other graphics.  Although, I won’t be using a tiara.  Maybe…

I haven’t finished her book yet but I have two-thirds of the book to go.  It’s a very interesting read if you get a chance to pick up a copy or buy an e-book version of it.  Even if you don’t like her you will find her book easy to read, heart breaking and hilarious all at the same time.  I laughed, I cried, I screamed in pain because I passed a kidney stone while reading.  Ok that last part wasn’t true but I did cry for her pain and I laughed at her jokes.

So now that I’m inspired by her writing, even though I’m not finished with her book I feel more comfortable to continue writing at night which is usually when I have more energy to write since I have insomnia.  Why I get energy late at night I have no idea.  It just happens that way.