I saw this story in the National Enquirer magazine but looked it up and this is the text from that story from MSNBC but is from Associated Press:

WILKES-BARRE, Pa. – Humane officers said a Pennsylvania woman marketed “gothic kittens” with ear, neck and tail piercings over the Internet. Officers with the SPCA of Luzerne County removed three kittens and a cat from a home outside Wilkes-Barre.

Officer Carol Morrison said the Society for the Prevention of Cruelty to Animals raided the home on Wednesday after getting a tip that the woman was selling the pierced kittens on eBay.

“It’s unbelievable anybody would do this to kittens,” Morrison said.

Charges are likely against the homeowner, whose name was not released.

Morrison said the woman has a pet grooming business in the basement of the home.

That is such a shame that this woman would do such a thing to these poor defenseless kittens.  She was arrested and she should never be allowed to come in contact with any animals unless they are dinner. 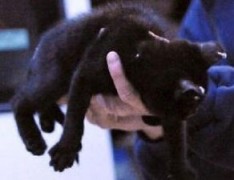